Getty Josh Allen #17 of the Buffalo Bills throws a pass during the fourth quarter against the Green Bay Packers at Highmark Stadium on October 30, 2022 in Orchard Park, New York.

The biggest question leading up to the Buffalo Bills (6-2) matchup against the Minnesota Vikings (7-1) on Sunday, November 13, is whether or not quarterback Josh Allen will be starting. While the MVP candidate was seen at practice on Friday, and his status was elevated to “questionable,” the Bills made a major roster move on Saturday that heavily implies if he’ll be suiting up.

Buffalo announced the third-string quarterback Matt Barkley would NOT be elevated to the active roster, which means the team is expecting Allen to start in Week 10. If Barkley was elevated, he would’ve been set up as the primary backup for quarterback Case Keenum.

NFL Network‘s Ian Rapoport tweeted, “The #Bills are not elevating QB Matt Barkley from the practice squad, source said, leaving the team with two on the roster. A sign QB Josh Allen is set to start. He is listed as questionable with an elbow sprain.”

Barkley, who previously served as Allen’s backup between 2018 and 2020, re-signed with Buffalo in March. Even though the Bills had already traded with the Cleveland Browns to bring in Keenum to replace Mitch Trubisky, adding Barkley, who remained close friends with Allen, brought a familiar face to the quarterbacks’ room.

Bills star receiver Stefon Diggs said earlier this week that he was ready to play with either Keenum or Barkley in Week 10. “I anticipate [Keenum] preparing the right way – him and Matt,” Diggs said, per One Bills Live host Chris Brown. “So, giving those guys confidence from the receiver position. I told my guys regardless of whoever is out there, we’ve got to still do our job. Get open and catch the ball. And try to get as many reps as we can during the week so we can build confidence. We’ve got a small window.”

Here is Josh Allen at the end of #Bills practice today.

No brace or sleeve seen on right elbow, but appears to be taped.

Once he notices media inside the team's fieldhouse, Allen runs off to locker room. pic.twitter.com/fsCvEO2nBk

However, it appears Diggs will be able to take the field with his QB1 on Sunday. Rapoport tweeted, “Allen is able to grip a football and he did some throwing on Friday. That gave enough confidence to proceed without elevating Matt Barkley from the practice squad and put Allen in line to play against the #Vikings despite an elbow sprain.”

WKBW Sports director Matthew Bové tweeted, “Idk what this means about Josh Allen & whether he’ll start tomorrow, but it does give us a clue that he’s not going to miss an extended period of time. Even if he’s a backup tomorrow, the team wouldn’t put him on the field even in an emergency situation if he wasn’t healthy.” 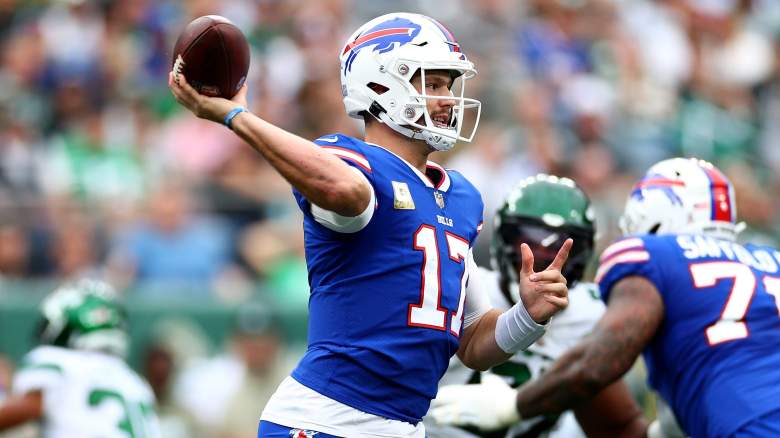 GettyJosh Allen #17 of the Buffalo Bills throws a pass in the first half of a game against the New York Jets at MetLife Stadium on November 06, 2022.

NFL Network’s Mike Garafolo tweeted on Wednesday, “Word is Josh Allen has expressed confidence to teammates he’ll be able to play Sunday vs. the #Vikings but that’s what I’d expect him to say. We’ll see as Sunday draws closer for the #Bills’ franchise QB.”

While McDermott has refrained from defining Allen’s exact injury, Rapoport reported earlier this week that “Allen is believed to be dealing with an elbow sprain, a UCL sprain, which is something actually he has had in the past,” and that it’s “not considered to be a major, major injury. Which means the belief is that it is something he can play through.

From @GMFB: #Bills QB Josh Allen is dealing with a sprained right elbow, sources say, a UCL injury that will limit him this week. While it’s no sure thing that Allen plays vs the #Vikings, belief is it’s an injury he can manage moving forward. How he responds this week is key. pic.twitter.com/86HQb0Kdzz

Allen previously suffered an elbow sprain during his rookie year at Wyoming in 2018. The injury kept him out for four games. 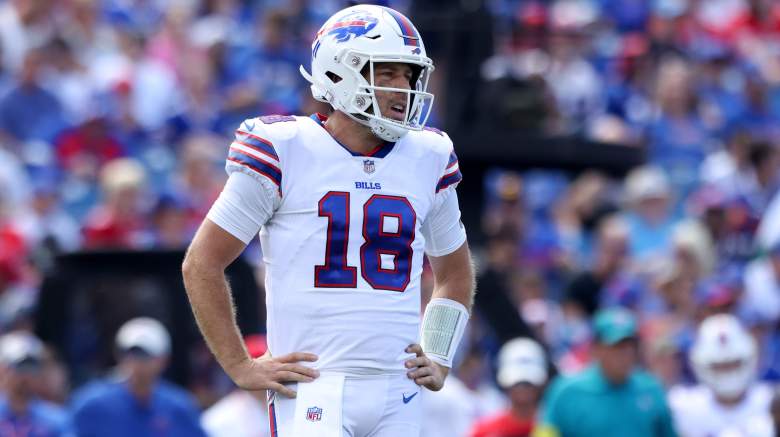 GettyCase Keenum #18 of the Buffalo Bills looks on during the second quarter of a preseason game against the Denver Broncos at Highmark Stadium on August 20, 2022.

During a press conference earlier this week, when Allen’s status was still up in the air, Bills head coach Sean McDermott said he’s confident that Keenum would be ready to go if his number is called.

“We believe in Case Keenum,” McDermott said of the 34-year-old. “He’s here for a reason.” This was the second time this week that McDermott touted Keenum’s talent. During Monday’s presser, “He’s a veteran player who has taken a lot of snaps and won games,” McDermott said. “Just his presence on our team carries an influence in a unique way. He knows his role. It’s been good to have him with us here.”

While suddenly shifting from the 6-foot-5, 237-pound dual-threat quarterback leading the offense to Keenum sounds like a daunting task, Diggs says it won’t be that difficult. In fact, Diggs boldly compared the former undrafted quarterback out of Houston to Allen.

Diggs, who will be facing his former team for the first time since he was traded in 2020, and was teammates with Keenum during his tenure in Minnesota, is not worried about the journeyman’s ability to step up and deliver. “He’s a winner. He’s a dog… he gives you that confidence that you can win,” the two-time Pro Bowler said of Buffalo’s backup. Bills reporter Maddy Glab tweeted, “Diggs says he sees similarities between Josh Allen and Case Keenum with their ability to run out of the pocket.”

Case Keenum and Stefon Diggs revenge game against the Vikings is going to be glorious pic.twitter.com/PrYnbfn9Ti

For Keenum, however, who’s played for seven teams during his NFL tenure, he’s not “more jazzed” at the possibility of facing the Vikings. “I’ve played a lot of my former teams before,” he told reporters on Wednesday. “That’s what happens when you have a lot of former teams.”

“Overall, “I feel great,” Keenum added. “I’m doing the same thing I do every week. I’m prepared to play every week.”

Loading more stories
wpDiscuz
0
0
Would love your thoughts, please comment.x
()
x
| Reply
The Bills' roster move with third-string quarterback Matt Barkley has major implications on if Josh Allen will be active against the Vikings.