The Buffalo Bills (6-3) are looking to bounce back big time when they take on the Cleveland Browns (3-6) in Week 11, however, the team hit an unexpected roadblock ahead of practice on Wednesday, November 16.

Head coach Sean McDermott announced that five players, Reggie Gilliam, Cam Lewis, Matt Milano, Jordan Phillips, and Tim Settle, “came in today with an illness,” per The Athletic‘s Joe Buscaglia. McDermott said they had to switch things up because in addition to their list of injured players, “There are not enough bodies to have a full practice,” he added, per Bills reporter Maddy Glab.

Did a lot of 'mental' reps but did NOT throw a football during the media portion of practice #BillsMafia pic.twitter.com/tedVtXxVCM

Bills quarterback Josh Allen was limited, while Tremaine Edmunds, Jake Kumerow, and Greg Rousseau, will not practice. Von Miller and Rodger Saffold are out with veteran rest days. Therefore, the Bills are “going to do mostly individual work today,” Syracuse.com‘s Matt Parrino tweeted.

While it’s not clear what kind of sickness has hit the Bills, hopefully, the affected players are able to get healthy before they host the Browns on Sunday, November 13. After two consecutive losses, Buffalo sits in third place in the AFC East and the team needs all the help they can get to secure a win in Week 11.

On a positive note, All-Pro safety Jordan Poyer (elbow) was back at practice which is great to see since the Bills have gone 1-3 in his absence. Also, wide receiver “Marquez Stevenson’s 21-day window to return to the active roster begins today,” Glab tweeted. “Speedy has been on IR since the season started with a foot injury.”

Allen Said of Buffalo’s Recent Losses, ‘We’ve Been Hurting Ourselves a Lot’

Josh Allen is currently leading the NFL with 10 interceptions🤯 pic.twitter.com/Mv9NB4JJhv

Allen knows he’s personally responsible for several costly mistakes that led to the Bills’ devastating 33-30 overtime loss to the Minnesota Vikings in Week 10, but it seems the MVP candidate has listened to his teammate, two-time Super Bowl champ Von Miller’s message and agrees that there’s no reason for panic.

“Big picture, We’re 6-3. We’re not going to let us end and tear us apart in the locker room and we’re going to try and play some good football moving forward,” Allen said during an appearance on “Kyle Brandt’s Basement” on Tuesday.

“We don’t have to make this a bigger deal than it is. We want to win every single game, when we step out on the field, it’s our goal… and obviously, we haven’t done that in the last couple of weeks… It’s not like we’re not a bad team. We’ve been hurting ourselves a lot. If we can make smarter decisions, if we can play situational football and complimentary football, that’s all we gotta do.”

Allen recognizes the Browns will show up to Highmark Stadium on a mission but says he’s preparing for everything Cleveland’s defense could possibly throw at him, in particular, Myles Garrett, who already has 7.5 sacks on the season along with 16 solo tackles.

“It’s a team that’s hungry. It’s a team that’s fighting for their season,” Allen told Brandt. “But I think we have that same type of urgency in our locker room right now, as well. In terms of defense, they’re one of the better defenses in the league. You’re talking about Myles Garrett being one of the most premiere defenders in the entire league. He’s a freak. He really is.” 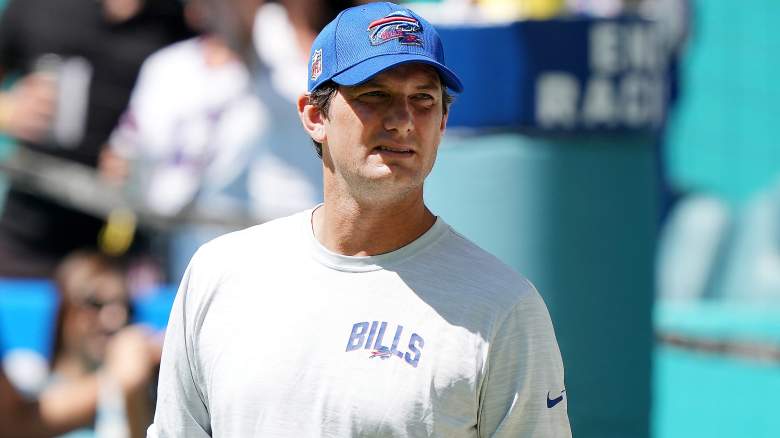 GettyBuffalo Bills offensive coordinator Ken Dorsey looks on during warm-ups before the game against the Miami Dolphins at Hard Rock Stadium on September 25, 2022 in Miami Gardens, Florida.

It’s impossible to discuss Allen’s mid-season slump without talking about offensive coordinator Ken Dorsey’s questionable playcalling. While fans have had it, calling for Dorsey to be fired on Twitter, NFL analysts believe Allen’s reckless play can be fixed with better coaching and better use of the run game.

Buscaglia wrote, “Dorsey has left a bit to be desired past the team’s surge to begin the year… The Bills have devolved into an offense wholly reliant on Allen bailing them out time after time rather than the omnipotent offensive attack they’ve shown the potential to be in spurts.

“Over the last two losses, when the Bills were trying to put away their opponents in the second half, they have only called a rushing play to their running backs on 19.6% of their plays for a total of 32 yards. For a team designed to get out to huge leads that need to put away their opponents, passing the ball over 80 percent of the time in the second half is unsustainable.”

The Ringer’s Steven Ruiz noted, “The Bills rank 20th in red zone touchdown percentage after 10 weeks. Considering they led the league in that statistic in 2021, new offensive coordinator Ken Dorsey, who replaced Brian Daboll, is shouldering a lot of the blame.”

The Buffalo News’ reporter Jay Skurski wrote, “The Bills have just 12 points in the second half over the past three weeks. That does not speak well to any adjustments that offensive coordinator Ken Dorsey is making at halftime. Why trade for [Nyheim] Hines to give him two targets over his first two games? Why is the message about taking better care of the football not getting through? Given how much of a priority that is for head coach Sean McDermott, that’s a troubling question.”

Loading more stories
wpDiscuz
0
0
Would love your thoughts, please comment.x
()
x
| Reply
The Bills were unable to practice team drills on Wednesday, November 16 after several players were hit with an illness.