Bills safety Micah Hyde, along with several of his teammates, share videos of their attempts to exit their homes following a major snowstorm in Buffalo.

The Buffalo Bills faced the daunting task of getting out of Orchard Park to board a flight to face the Cleveland Browns on Sunday, November 20 in Detroit. The Bills’ Week 11 matchup was originally scheduled to take place at Highmark Stadium, but due to public safety reasons regarding the historic snowthunder storm, the NFL moved the game to Ford Field on Thursday night.

While the Bills were hit with major backlash for not getting out of Buffalo immediately, as the Orchard Park area was hit with nearly 6.5 feet of snow — basically the height of quarterback Josh Allen — the team is doing everything they can to get the players out of their homes and to the airport on Saturday afternoon.

The Athletic’s Tim Graham tweeted, “Bills COO Ron Raccuia, while actually driving to pick up players just now, tells me: “We are doing everything we possibly can to pull this off and get to the airport and get to Detroit this afternoon. Every aspect of the organization is a part of this effort.”

Bills safety Micah Hyde‘s wife Amanda, shared the craziest video of her husband running through their backyard while holding his jacket — not wearing it.

Amanda posted the video on Instagram and begged, “Somebody come get him.” While Hyde is on IR for the remainder of the season after suffering a neck injury in Week 2, the All-Pro has taken on a new role as a player-coach for the season and has been traveling with the team for each game since he recovered from surgery.

As for Hyde’s teammates, the Bills were only able to practice once this week, as an undisclosed illness taking out several players forced a cancellation on Wednesday, and the snowstorm made it impossible for players to safely get to the facilities on Friday. 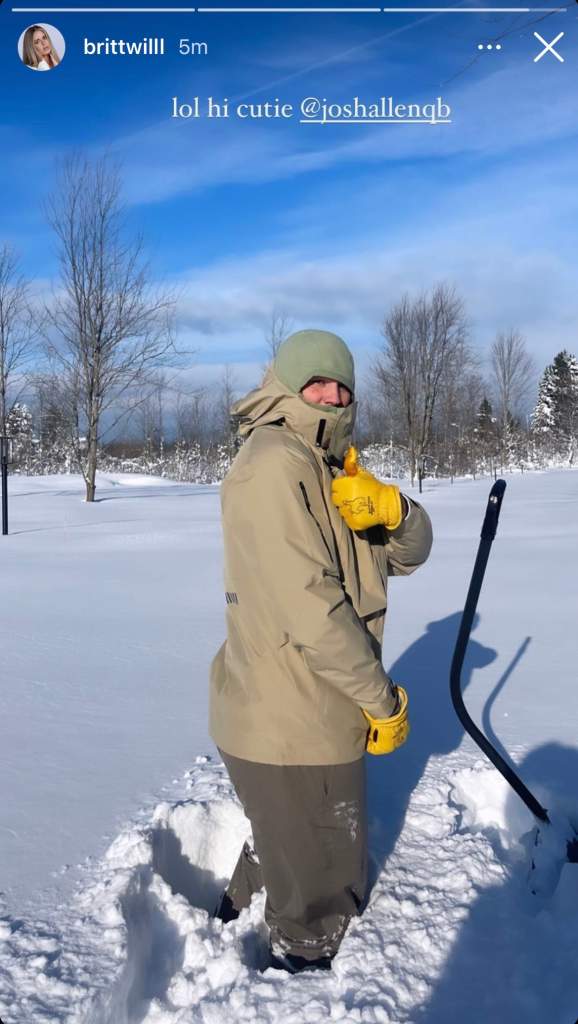 @brittwilll/InstagramBills quarterback Josh Allen shoveling snow in his front yard to get to the airport on Saturday, November 19.

Allen’s girlfriend, Brittany Williams, was out in their front helping dig the team’s superstar quarterback out so he can play. She posted a photo of Allen outside with a shovel trying to do his part.

ESPN’s Adam Schefter tweeted, “Despite the massive snow fall in Buffalo, the Bills’ team flight is on track to leave Buffalo for Detroit at 4 pm today.” Just before 2 p.m. ET, Schefter added, “All players and coaches have made it to the Bills Training Center. They are almost ready to depart for Detroit.”

With the clock is ticking for the Bills to get to Detroit, as per the NFL’s guidelines, a team “must be in the game city” 18 hours before kickoff, it seems the entire Buffalo community is chipping in to help make sure their hometeam doesn’t get the game canceled.

While Twitter quickly filled with doubters that Buffalo could pull off this incredible feat in the midst of such a wild snowstorm, former legendary Bills center Eric Wood believes they’ll make it. Wood tweeted, “For those wondering how the Bills will get to the airport today, just a reminder that in 2014 some of us got picked up from our houses on snowmobiles by random strangers. They’ll do what’s necessary to get to Detroit today. I can guarantee you that.”

For those wondering how the Bills will get to the airport today, just a reminder that in 2014 some of us got picked up from our houses on snowmobiles by random strangers. They’ll do what’s necessary to get to Detroit today. I can guarantee you that.#BillsMafia pic.twitter.com/1fCEXsNYPs

Players such as tight end Dawson Knox, offensive lineman Spencer Brown, and full back Reggie Gilliam expressed their gratitude for people showing up and volunteering to help out. “Mafia, you never fail to amaze me! 💙,” Gilliam tweeted. Knox announced via his Instagram stories, “The city of good neighbors. Gettin’ to the plane. Wow, let’s go. Never seen anything like it.”

Mafia, you never fail to amaze me! 💙 pic.twitter.com/qcCAgRsR82

To check out all the players’ posts since the snowstorm started to hit Erie County on Thursday night, Buffalo Rumblings put together a killer Twitter thread of all their shared photos and videos.

At the start of the week, the Bills were deemed 9.5-point favorites to beat the Browns at Highmark Stadium. “The point spread moved from Bills -9.5 to -8, anticipating a low-scoring game and perhaps the run-first Browns being better equipped to play in the snow,” Yahoo! Sports analyst Frank Schwab reported on Thursday. “There were a lot of under bets on the total, which moved from 47.5 to 43 early this week.”

However, the location change has once again affected the game odds. “The Bills are now 7.5-point favorites,” Schwab wrote. “The line is lower because they’re playing on a neutral field instead of a home game. The over/under came back at 48.5. It’s even higher than the original line because the two teams will be in a dome.

After seeing the community effort to dig players out of their homes on Saturday, Sporstline hilariously tweeted, “You think these fans have Buffalo (-8) 😂? “

Loading more stories
wpDiscuz
0
0
Would love your thoughts, please comment.x
()
x
| Reply
Bills safety Micah Hyde, along with several of his teammates, share videos of their attempts to exit their homes following a major snowstorm in Buffalo.