Getty Bills wide receiver Stefon Diggs (L) lost his cool with quarterback Josh Allen during the fourth quarter of their playoff loss to the Bengals.

While anticipation was high for the ultimate explosive showdown between the Buffalo Bills and the Cincinnati Bengals in the AFC Divisional playoff round on Sunday, January 22 — this game was anything but. The Bills’ defense couldn’t do anything to stop Bengals quarterback Joe Burrow, and quarterback Josh Allen couldn’t get anything going on offense.

The Bills’ 27-10 loss to the Bengals was embarrassing on all fronts and wide receiver Stefon Diggs knew it. During the fourth quarter, the two-time Pro Bowler couldn’t contain his frustrated emotions. With 6:42 left in the game, CBS cameras caught the Bills’ No. 1 receiver walking past Allen on the sidelines putting both arms up, chirping hard at the 26-year-old superstar.

Allen, for his part, completely ignored Diggs’ outburst. He kept his head down and didn’t acknowledge his presence at all.

During the postgame press conference, Allen addressed the sideline incident. “He’s a fiery competitor,” Allen said of Diggs. “He wants the ball. Whatever it was that we couldn’t get him the ball tonight, we’re gonna have to learn from.”

This isn’t the first time this season that Diggs has lost his cool after getting annoyed with his lack of targets. Head coach Sean McDermott had to calm Diggs down during the second quarter of the Bills-Brown game on November 20, and it was glaring issue following Buffalo’s win over the Detroit Lions on Christmas Eve, as the 28-year-old receiver wasn’t targeted once during the first half.

Against the Bengals, Diggs caught 4-of-10 targets for a total of 35 yards and zero touchdowns, per ESPN. As for Allen, he completed just 59.5% of passes, going 25-of-42 for 265 yards, one rushing touchdown, and one interception.

McDermott told reporters after Sunday’s defeat that he’s not worried about Diggs’ outburst, “He’s a competitive guy. That’s what makes him great. What you saw… I wouldn’t want a guy that doesn’t hurt.”

Diggs Grabbed His Things & ‘Darted Out of the Locker Room’ After the Game: Report 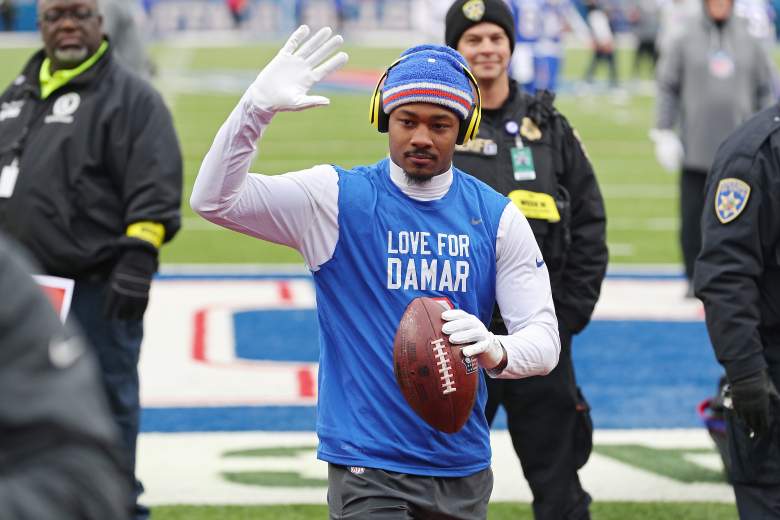 GettyStefon Diggs #14 of the Buffalo Bills waves to fans at Highmark Stadium on January 08, 2023.

Diggs was unable to cool down after the final whistle blew, which came shortly after Allen threw an interception with 1:02 left to play. The Athletic‘s Joe Buscaglia tweeted, “Diggs darted out of the locker room with all his stuff before some of the Bills coaches were even down to the tunnel area. Practice squad RB Duke Johnson stopped Diggs before he left the stadium and brought him back to the locker room. He left a few minutes later.”

Fans had strongly mixed reactions to Diggs’ postgame behavior. Former Bills player John “Pops” Davis tweeted, “Losing is emotional, please don’t judge,” while one fan wrote, “I GET IT. absolutely inexcusable way to end the year. diggs is fed up with this team constantly not being prepared for the biggest moments.”

Another fan wrote, “Indefensible. Love Stefon but that’s our of order. Seeing him shouting at Josh on the sideline was horrible. Lost a lot of respect for him.”

Several people on Twitter believed Diggs has every right to be angry. Another fan tweeted, “Multiple weeks in a row where Dorsey can’t get Diggs, a top 3 receiver in this league, the ball. Its unacceptable and I’m tired of hearing the excuses. There’s no excuse for it when it happens consistently week after week,” while another person wrote, “At least someone cares. Tell Stef we’ll get him a new coach.”

The Buffalo News‘ reporter Jay Skurski expected more of the veteran. Skurksi tweeted, “It is absolutely weak on Stefon Diggs’ part to leave the locker room before it’s open to the media. He’s a team captain and should uphold his responsibilities in that regard, instead of leaving it up to his teammates.”

McDermott said during his postgame presser that Diggs was in the locker room when he addressed the team. “That’s what matters most,” he said.

Alled Called This Season ‘Null & Void’ After the Game

Josh Allen leaving the field for the final time this season. pic.twitter.com/Ewc3Vuu5ZE

Buffalo entered the 2022-23 NFL season as the favorite to not just make it to the Super Bowl but to win it, and for the second year in a row, the Bills’ postseason was cut short in the divisional round.

“Everything that happened this season is kind of null and void in our minds,” Allen said after the loss. It sucks.”

ESPN reporter Alaina Getzenberg tweeted after the game, “Allen sat in the back of his locker stall, still in his uniform, and talked with backup QBs Case Keenum and Matt Barkley for a bit. On his phone some. Sort of just looked like he was processing. Eventually got up to shower.”

While one could argue Allen could’ve done more or played better, that seemed to be the Bills entire offensive game plan — hoping he goes into superhero mode to pull out a win. As for the defense, it was their first game playing without starting defensive tackle DaQuan Jones, and it showed.

“There was no real energy, juice, no momentum,” linebacker Matt Milano admitted to reporters after the game.