Getty Linebacker Von Miller #40 of the Buffalo Bills walks on the field before the NFL game against the Los Angeles Rams at SoFi Stadium on September 08, 2022 in Inglewood, California.

During the Buffalo Bills‘ impressive 31-10 victory over the Los Angeles Rams on Thursday Night Football, linebacker Von Miller made a statement on the field, recording two quarterback hits and a pair of sacks, however, his haircut seemed to garner even more attention than his stellar performance.

While walking to the sidelines, Miller removed his helmet, revealing a triangle patch of hair on the back of his bald head. A photo of the eight-time Pro Bowler’s haircut instantly went viral on Twitter, as viewers tried to figure out the inspiration for the incredibly unique look.

Another man tweeted, “What the f*** was Von Miller’s hair???? Man had the Illuminati in his head??” while a brave fan promised, “If the #BillsMafia win the super bowl, Ill cut my hair like Von Miller’s.”

Every sack Von Miller gets he earns a puzzle piece of his hair back pic.twitter.com/Sp8rHyN1RS

One man tweeted, “As a society I feel like we haven’t talked enough about the patch of hair on the back of Von Miller’s head.” And the truth is, the bizarre haircut is nothing new for the two-time Super Bowl champion.

At the very bottom RT @aaronontiveroz: Where does von miller's new haircut rank in the league standings? pic.twitter.com/r1fg0Kx48Q

Miller rocked a circle patch of hair on the back of his head when he played with the Denver Broncos, and the triangle shape made its debut after he was traded to the Rams last season. Whether or not these symbols have a deeper meaning remains unclear.

Regardless, the haircut was new for Bills Mafia, but fans will have time to get used to the triangle ‘do. This offseason, the 33-year-old signed a six-year, $120 million contract with the Bills, which means the future Hall-of-Famer will likely finish his career in Buffalo.

Von Miller with his first sack as a Buffalo Bill pic.twitter.com/DmPUqTFNpV

During the postgame press conference on Thursday night, Miller gave credit to the entire defensive line. “Everybody balled out,” said Miller. “We’ve got a great unit and we’ve got a great coaching staff as well. Coach [Leslie] Frazier, you know, Coach [Eric] Washington, they do a good job getting us ready to go. I think everybody on the line had a sack today and we had three interceptions. So, it was a great day. It always feels good to go out there and do your job.”

Overall, the Bills sacked quarterback Matthew Stafford seven times and kept the Rams’ offense to just 243 yards and one touchdown. Seven of the eight defensive linemen playing recorded at least one quarterback hit, per The Athletic‘s Tim Graham.

Von Miller is fitting right in with #BillsMafia

That's his second sack of the night 😏@VonMiller x @BuffaloBills | via @NFL pic.twitter.com/UYqUHTySMO

“Pro Football Focus charted [Jordan] Phillips with three quarterback hits and a game-high four hurries in addition to his 1.5 sacks, a gaudy 28% pass-rush success rate,” Graham reported. “Miller was next at 20%, followed by [Ed] Oliver at 15.4% and [AJ] Epenesa at 14.3%. New defensive tackle Tim Settle, the lone Bills lineman without a sack or QB hit, was credited with two pressures for a respectable 10% success rate.” 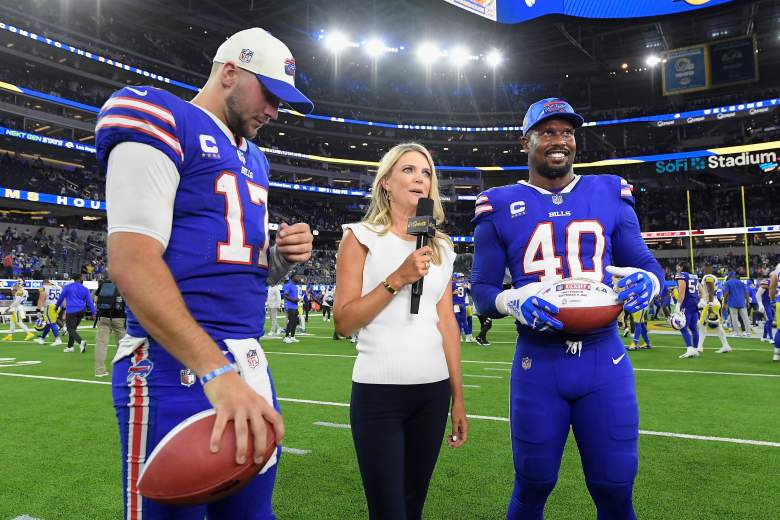 GettyVon Miller #40 and Josh Allen #17 of the Buffalo Bills at an interview after a 31-10 win over the Los Angeles Dodgers at SoFi Stadium on September 08, 2022 in Inglewood, California.

Miller said after the game that “Los Angeles has a special place in my heart and Super Bowl 56 will always have a place in my heart,” but the former No. 2 overall pick from the 2011 NFL doesn’t seem to have any regrets over his decision to leave the Rams.

While it feels like he’s “playing against his brothers,” playing on the same team as quarterback Josh Allen is exhilarating for the veteran edge rusher.

“He’s a creature,” Miller said. “He’s the leader of our team. We kind of follow his lead. He’s a tough guy out there, running guys over, stiff-arming guys, had a lot of success tonight, and we just kind of fed off each other. Those are the games that you want to play in.”

Miller also used the postgame conference to make another push for free agent wide receiver Odell Beckham Jr. to join the duo in Buffalo. “I mean, we get gotta wait and see. I think we did everything we could possibly do to get him, ” Miller said. “We have to wait ’til he gets healthy. We got a great squad over here. I think Josh would like another weapon. That’s just another guy that we can get the ball to.”