The Buffalo Bills (8-3) head into Week 13 without one of their superstars as edge rusher Von Miller suffered a knee injury against the Detroit Lions on Thanksgiving Day. The eight-time Pro Bowler got stepped on by Lions center Frank Ragnow on his way to tackle quarterback Jared Goff with 2:44 left in the second quarter and was carted off the field. Miller injured the same knee back in 2013, during which he tore his ACL.

After undergoing tests on Friday, November 25, it was revealed that Miller did not tear his ACL, per ESPN‘s Adam Schefter, but he’s “considered out indefinitely” until the team gathers more information. An MRI revealed that the 33-year-old veteran suffered a lateral meniscus tear, per NFL Network‘s Ian Rapoport, and will be re-evaluated after seven to 10 days.

The #Bills are ready to roll without Von Miller.

"Nobody's selfless enough to shy away from the challenge of it."

And they plan on using lessons Miller taught to hold things down until he returns.

Bills head coach Sean McDermott ruled Miller out for their upcoming matchup against the New England Patriots on Thursday Night Football in Week 13, but the question as to whether he’ll be able to return to play at all this season remains to be seen.

On Saturday, November 26, ESPN’s Jeremy Fowler reported, “Miller is going to wait about a week, see how injury feels, then hopes to play with a brace, which he’s done before and is comfortable with,” WGR 550‘s Sal Capaccio tweeted. “However it might not be possible, and could still have to have surgery, ending season.”

On Monday, November 28, Miller posted for the first time on social media since he suffered the lateral meniscus tear, and appeared to start a countdown. “2 Weeks,” Miller wrote on his Instagram stories. While he didn’t clarify whether he’d be back on the field in two weeks, or whether it would be two weeks until we learned of his fate for the 2022 NFL season, the 33-year-old seems to be super positive about the situation. 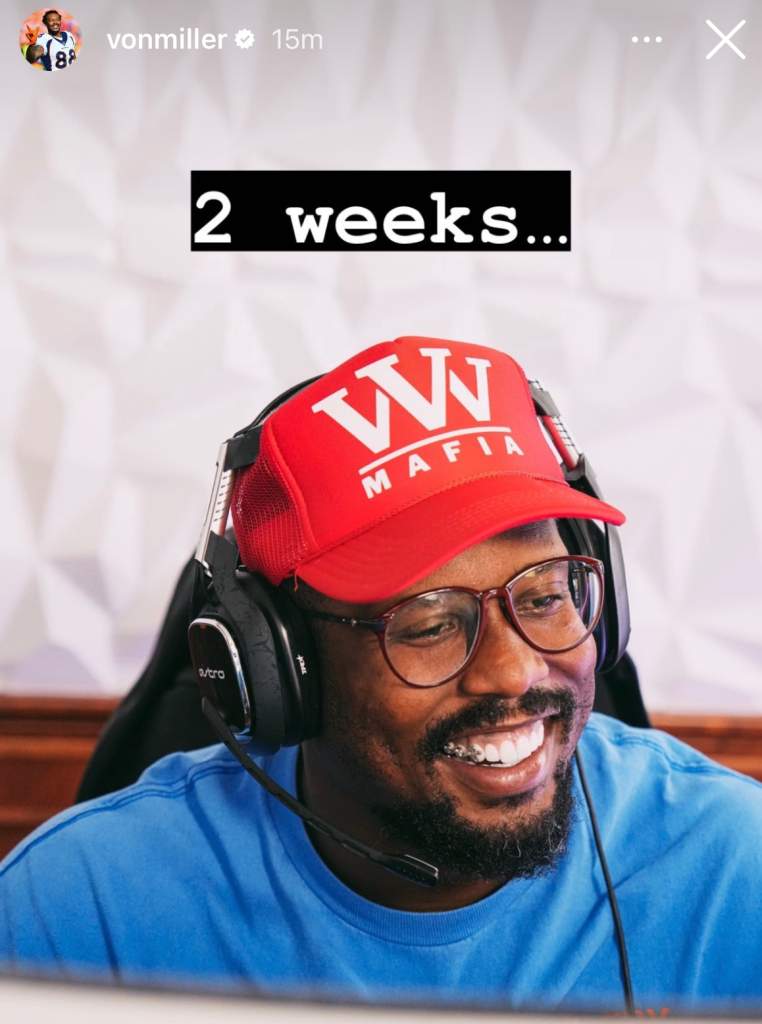 Rapoport reported over the weekend that Miller will definitely require surgery, but the big question is whether or not the Super Bowl 50 MVP can wait until after the season ends. Miller, who’s yet to miss a game this season, has recorded eight sacks, 18 solo tackles and a forced fumble.

UPDATE: On Tuesday, November 29, Miller said on his podcast that he’s hoping to be back on the field when the Bills face the New York Jets in Week 14, which would line up with his two-week timeline.

Von Miller says he has a lateral meniscus injury and hopes to be back by the Bills-Jets game 🙏 pic.twitter.com/YKf6nZkrIf

“It’s not the best of news but it’s definitely not the worst of news,” he said. “I didn’t tear my ACL. That was a huge part of it. But I do have some lateral meniscus damage that’s going to have to be addressed. But I do feel like I can play through that. I’m going to wait a little bit. Let the swelling go down for 7 to 10 days and hopefully right before the Jets game, I will be back.”

The waiting game regarding Miller’s status is going to be stressful for all of Bills Mafia, especially since CBS Sports‘ Josina Anderson reported that “there’s other damage” to his knee that’s cause for concern, and will be evaluated for multiple second opinions before making a final decision on the 2022 NFL season. “I’m told Miller is in no rush to decide,” Anderson tweeted.

Pro Football Doc David J. Chao believes Miller should be able to return since he did not tear his ACL. “Will take this ‘good news,'” Chao tweeted. With a lateral meniscus tear, “expect a scope with recovery for late season/playoff return.”

Banged Up Bills reported that Miller only missing two to four games “could be considered realistic,” without knowing the size of the tear, or how his knee responds to rest and rehab, an exact prognosis remains unclear.

The Bills are Favored to Beat the Patriots in Week 13

The Bills are back on top of the AFC East… for now pic.twitter.com/5xn5io0jVX

The Bills’ upcoming matchup against the Patriots is super important considering Buffalo is 0-2 this season against division rivals and a victory would go a long way in nabbing the AFC East title. Per DraftKings, the Bills are considered 5.5-point favorites to defeat the Patriots on Thursday, December 1.

While the Bills will be without Miller, Buffalo’s injury report on Monday did reveal some great news. Quarterback Josh Allen was a full participant for the first time since he suffered an elbow sprain in Week 9 against the Jets.

Also, the fact that defensive ends Greg Rousseau and A.J. Epenesa were full participants in practice on Monday is a huge boost for the Bills ahead of their primetime divisional matchup.