The Chicago Bears officially announced a few minor roster moves Tuesday. The team made the signing of kicker Cairo Santos official, and they placed tight end Darion Clark on injured reserve. The Bears also announced that they waived ex-Packers wide receiver Trevor Davis, while signing wide receiver Alex Wesley, who was on their practice squad December of 2019.

Wesley will likely be a member of the team’s practice squad for the second straight season. The Bears must have felt more comfortable with him than they did Davis, who spent his first three seasons with the Packers before being traded to the Raiders. It was thought when Chicago added Davis earlier this year that his history as a kick return specialist might give him a slight edge, but apparently, it did not. 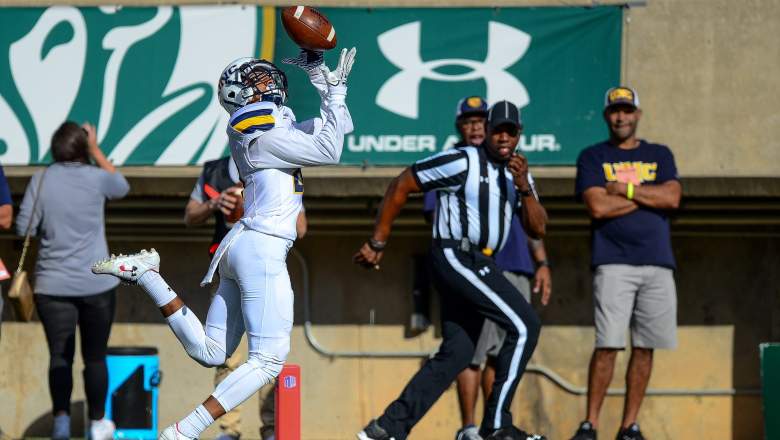 The 5-foot-11 1/2, 190 pound Wesley signed with the New York Giants as an undrafted free agent last season, but was released when final cuts were made. He didn’t catch on in Chicago until December, where he spent a little time on the team’s practice squad. Wesley was one of nine players the Bears signed to reserve/future contracts at the end of the season last year, which signaled the team had some interest in him moving forward.

Wesley played in 42 games at Northern Colorado, where he caught 156 passes for 2,716 yards receiving and 17 touchdowns. He had back-to-back 1,000 yard seasons his junior and senior campaigns, and his skill set seems to be one Matt Nagy finds attractive.

He is a speedy wideout, running the 40-yard dash in 4.45 seconds at the NFL Scouting Combine. He plays the ‘Z’ receiver, and in a season when backups will be more important than ever due to COVID-19, he’ll likely be stashed on the practice squad, where he’ll stay unless ailments befall wideouts Ted Ginn Jr. and rookie Darnell Mooney. If he can contribute effectively on special teams, he might have a very slim chance at making the roster — but the odds are against it.

The Bears released Wesley in July, only to bring him to camp and add him yet again.

Trevor Davis, We Barely Knew You

While the Packers and Bears have swapped their fair share of players over the years, Davis will not be added to that list. After the Packers traded Davis to the Raiders for a sixth-round pick, he started four games for Jon Gruden and company before he was waived after a rough game against Kansas City.

Davis fumbled a kickoff and failed to convert a key fourth-down sweep during that game, and the team parted ways with him the following week. The Dolphins claimed him off waivers shortly after that, and he finished the season in Miami. His return abilities may land him on a roster somewhere, but it won’t be in Chicago.

Loading more stories
The Bears have made multiple roster moves, signing one WR while releasing another.