Kevin White just got a second chance. The former first-round pick of the Chicago Bears has signed a one-year deal with the San Francisco 49ers, per NFL insider Ian Rapoport. The 49ers added White after the much-maligned wideout passed a physical.

White also had a tryout with Adam Gase and the New York Jets last week, but it didn’t work out. He then visited San Francisco a few days later, and Kyle Shanahan and company must have liked what they saw, because they are willing to take a chance on him.

Kevin White Couldn’t Stay on the Field in Chicago

The Bears selected White seventh overall in the 2015 NFL Draft, and a litany of injuries hampered him every year but one. There was the stress fracture in his leg during his rookie year, followed by a severe high ankle sprain and fractured fibula in 2016. A fractured shoulder blade in 2017 followed, and even though he stayed healthy in 2018, new head coach Matt Nagy hadn’t built a strong enough rapport with him, and the Bears let him go after the end of the season.

White was out of football all of last year after a 2019 tryout with the Cardinals didn’t go anywhere, so what kind of player the 49ers will be getting is anyone’s guess. Bears fans have to be rooting for him, particularly after all the hardships he’s had to endure over the years.

White Is Well Aware of the Narrative Surrounding Him 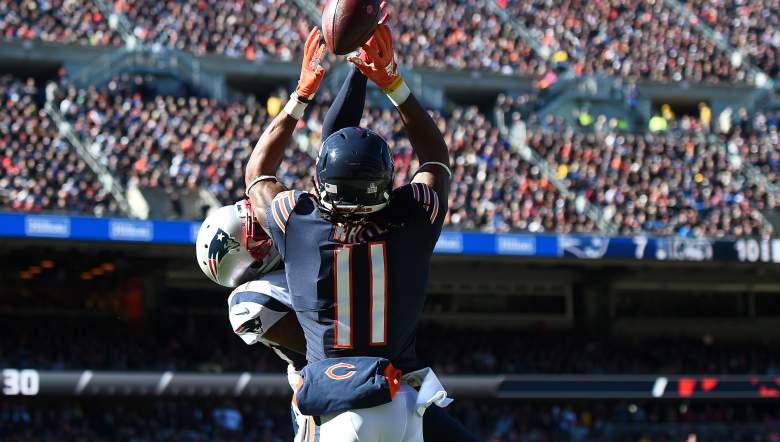 During an interview with NBC Sports’ J.J. Stankevitz earlier this year, White was asked what words he thinks people associate with him, he was candid and blunt in his response:

“When they think of Kevin White: Bust, injuries, we don’t know, question mark,” he said. “People can say bust or whatever the case may be, and it is attached to my name by default. So I think for me, okay, you can say Kevin White’s a bust because it didn’t work out. Absolutely. But you can’t say Kevin White can’t play this game or Kevin White can’t get open or Kevin White’s dropping passes. You couldn’t say any of that. Not at practice, not in the little bit of games that I did play. You could say injuries, you know, held me back but you can’t say I was out there and just pissed it all (away) — you can’t say that.”

Now, White gets a second chance with a quality franchise in the 49ers, and it will be a fascinating storyline to watch.

One year ago, White posted a photo of himself on draft day in 2015, with the caption: “No injury, coach or fan opinion gonna stop my grind. Just remember this story when it’s all said and done.” Hopefully, his ending is a happy one.

No injury, coach or fan opinion gonna stop my grind. Just remember this story when it’s all said and done.

READ NEXT: Should Bears Be Concerned About LB Robert Quinn’s Mysterious Start?