Former NFL All-Pro DT Damon “Snacks” Harrison, who openly contemplated retirement last year, has decided to play this season and is scheduled to visit next week with the Seahawks, per source. The 31-year-old Harrison also has received interest from the Bears, Packers and Bengals.

Depth in the middle of the defensive line is more of an issue for the Bears now than it has been in recent years after stalwart nose tackle Eddie Goldman opted out of the 2020 season. Third year standout Bilal Nichols has been filling in capably, but now, his backup is hurt. Insider Ian Rapoport reported earlier Thursday that the Bears’ backup nose tackle, John Jenkins, is going to miss “several games” and is now head to IR after tearing a ligament in his thumb against the Lions Sunday.

#Bears veteran DT John Jenkins suffered a ligament tear in his thumb in Sunday’s game and played through it, source said. He’s now out several games & may be placed on IR. Meanwhile, Chicago signed DT Daniel McCullers off the #Steelers practice squad, as @DraftDiamonds reported.

If the Bears have a genuine interest in Harrison, they need to move swiftly, as a very attractive team over in Seattle is already courting him, and could be the favorite to land him. That said, there’s a lot to like about playing next to Akiem Hicks, Khalil Mack and Robert Quinn, too, and that could also influence his decision. Plus, Snacks has already gone on record saying he would definitely consider playing in Chicago, so there’s that.

When chatting with fans on Twitter just a few weeks ago, one Bears fan asked Harrison if he would come to Chicago to play alongside the likes of Mack and company, and Harrison replied: “That’s a option.”

That’s a option as well https://t.co/ahpG5pVcGD

Harrison also revealed then that the Packers were one of several teams who had shown interest in him. While it would sting for the Bears to lose out on his services to their biggest divisional rival, it may be the Seahawks who sign him when it’s all said and done. Their roster is an attractive one, and it’s a destination few players wouldn’t embrace.

Still, the Bears are hurting right now at the nose tackle position, and snagging Snacks would make too much sense. They certainly have the cap space to go out and get him, and the need is there, now more than ever.

John Jenkins Injury: How Much Time Will Backup NT Miss? 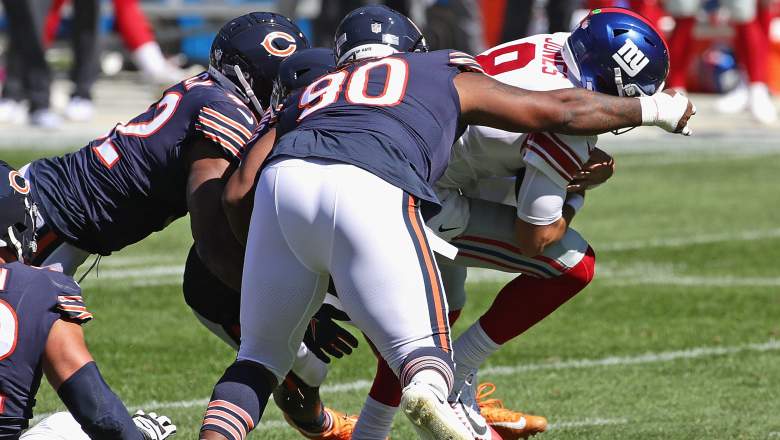 According to Rapoport, Jenkins played through the thumb injury Sunday, and will now be out several weeks. The team will place him on injured reserve, according to coach Matt Nagy, so he’ll miss at least three games — maybe more. He has played 34 percent of the team’s snaps on defense so far this season.

The safe bet would be for the Bears to prepare for the worst and assume Jenkins will miss a month or more. As it stands, that seems reasonable considering he suffered a ligament tear.

To add more depth at the position, Chicago went out and signed defensive tackle Daniel McCullers off the Steelers’ practice squad on Wednesday, and while McCullers has solid NFL experience, it’s nothing like Harrison’s. If the Bears are smart, they’ll go after Harrison in a big way.

Read More
Chicago Bears, Green Bay Packers, NFL, Seattle Seahawks
The Bears' depth on the defensive line just took another big time hit, but the Bears may be in the mood for some Snacks...