Khalil Mack wants Mitchell Trubisky to make opposing defenses put a little respect on his name. When he was mic’d up for Sunday’s win against the New York Giants, we got a glimpse of what the Chicago Bears linebacker had to say to the team’s starting quarterback before kickoff.

In a candid moment many Bears fans don’t get to see often, Mack pulled Trubisky aside before the game against the Giants and gave him a pregame pep talk laden with one main message: make defenses respect you. Trubisky, who beat out veteran Nick Foles for the starting job, has shown improvement in many areas this season, but he hasn’t been able to play four strong quarters of football in a row yet.

Khalil Mack to Mitch Trubisky: ‘Make Them Respect You’ 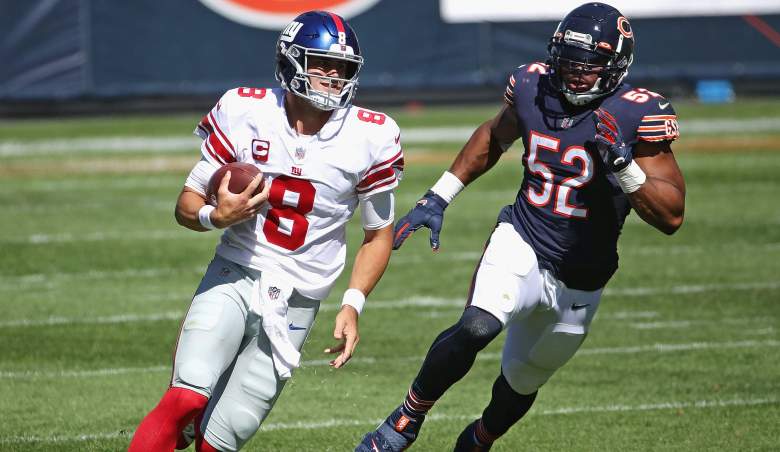 GettyLB Khalil Mack of the Chicago Bears chases down Giants QB Daniel Jones during the Bears’ win at Soldier Field on September 20, 2020 in Chicago, Illinois. (Photo by Jonathan Daniel/Getty Images)

Look — we all know Trubisky isn’t the best quarterback out there doing it right now. He’s not even the best quarterback in his division. But Mack, an All-Pro and an unquestioned leader on the team, said those things not necessarily because they’re true, but because he wanted to hype up his young quarterback, which is what good leaders do.

Confidence is key for NFL players, particularly quarterbacks, and Mack and Trubisky are both well aware of the narrative surrounding the fourth-year signal caller. It’s up to Trubisky to turn his doubters into apologists, and if he can start to string together full games instead of a few quarters, he’ll begin earning that respect Mack was talking about.

Later in the game, Mack continued his support of Trubisky, yelling: “Hey, 10! Let’s go! We got your back.”

Mack then talked a little smack to and about quarterback Daniel Jones, saying: “He sacred, he scared, it’s coming out quick,” after Jones starting getting rid of the ball more quickly. At one point, Mack also referred to Sunday’s 17-13 win against the Giants as a “stat game,” and after notching a fumble recovery, a sack and seven pressures, he wasn’t wrong. The Bears sacked Jones four times.

You can watch all of Mack’s best mic’d up moments in the video below. His clip with Trubisky happens right off the bat.

Khalil Mack Mic'd Up vs. Giants 'This a stat game fellas!' | Chicago BearsGo on the field with Linebacker Khalil Mack as he is mic'd up for the Bears' matchup with the New York Giants in Week 2 of the 2020 season. Subscribe to the Bears YT Channel: chgobrs.com/1LfmYsY More Bears NFL Action: bit.ly/33gtjDp #ChicagoBears #Bears #NFL Keep up-to-date on all things Bears: Visit ChicagoBears.com for more. Follow:…2020-09-23T00:00:12Z

A mic'd up moment reveals what Khalil Mack has to say to QB Mitchell Trubisky before the game starts.