The Chicago Bears will be short-handed on defense heading into their Wild Card game against Drew Brees and the New Orleans Saints, and they’re turning to the practice squad as a result.

The Bears have added former Chargers and Saints linebacker Manti Teʻo, along with safety Marqui Christian, to the active roster Saturday. The moves came along with the announcement that starting linebacker Roquan Smith would miss the game. The Bears will also be without play-making rookie wide receiver Darnell Mooney and starting cornerback Buster Skrine, who has been out over a month after suffering a concussion. Christian will likely be there for depth in the secondary, a move the team also made before last week’s game.

A former second-round pick by the Chargers (38th overall) in the 2013 NFL Draft, T’eo was a standout at Notre Dame and was thought to be one of the best linebackers in the nation at the time — if not the best. But foot, ankle and Achilles injuries derailed his career early on, and he never fully recovered.

Te’o spent his first four seasons with the Chargers before catching on with the Saints in 2016. He played in New Orleans for three seasons, starting 14 games in that span, including two starts last season. He has not played since.

In his seven-year career, T’eo has started 48 games, playing in 62. He has 212 solo tackles, 22 tackles for loss, five quarterback hits, two interceptions and 1.5 sacks in that time. 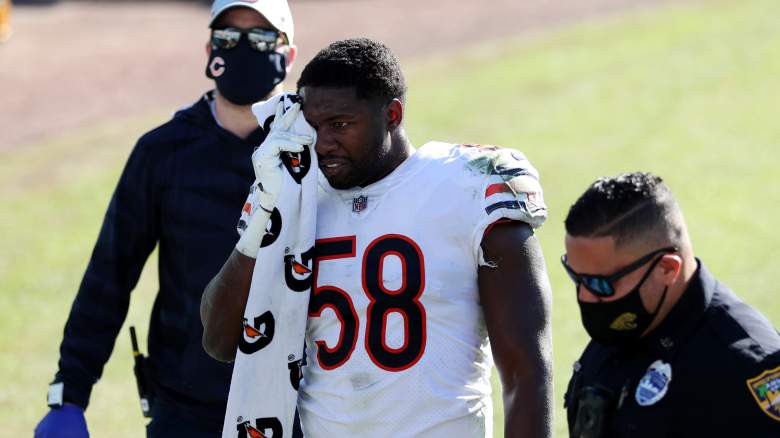 GettyLB Roquan Smith of the Chicago Bears suffered an elbow injury last week in the team’s 35-16 loss to the Green Bay Packers. The severity of Smith’s injury remains unknown.

With Smith, who was named a second-team All-Pro this week, out of the lineup, the Bears will be lacking a speedy and intimidating presence that can run sideline to sideline against New Orleans. With Alvin Kamara slated to return after a positive COVID-19 test, this is a significant issue. While T’eo may or may not hit the field, his time with the Saints could perhaps provide the Bears with a little intel at the very least. The Saints will also be getting one of the league’s best wideouts, Michael Thomas, back for this one, so the Bears will be facing a tough Saints team with most of its weapons ready to go.

Chicago will be leaning on backups Josh Woods and Joel Iyiegbuniwe to fill in for Smith, and while both are capable special teams contributors, both also struggled filling in for the former eighth overall pick last week against the Packers. How well they perform could very well determine the Bears’ fate against the Saints.

Loading more stories
wpDiscuz
0
0
Would love your thoughts, please comment.x
()
x
| Reply
The last time he started a game was when he played for the Saints in 2019.