Chauncey Gardner-Johnson of the New Orleans Saints has responded to the punches thrown by Bears WR Javon Wims.

After getting hit in the helmet not once but twice by Chicago Bears wide receiver Javon Wims, New Orleans Saints defensive back Chauncey Gardner-Johnson responded first by mercilessly trolling the Bears and attempting to insult Wims before denying he did anything at all to provoke him.

He also took the time to comment on and attempt to insult Wims, and he threw in a tad of sexism for good measure, saying Wims “punch like a female” in his Instagram story.

C.J. Gardner-Johnson responded to Javon Wims’ punches via Instagram saying it was a “cheap shot” and that Wims “punch like a female.” pic.twitter.com/Xv1f5pC8Pb

On Monday, Tom Pelissero of the NFL Network reported that Wims had told Bears team officials that Gardner-Johnson spit on him. There is no evidence — at least so far — that Gardner-Johnson expectorated on Wims, but Twitter captured a few unsportsmanlike incidents he did partake in, including ripping Wims’ mouthpiece off and sticking his finger into the face/face mask of wideout Anthony Miller.

It absolutely doesn’t excuse Wims’ behavior in the slightest, but considering the dangers pertaining to saliva and the coronavirus, spitting on another player is far more serious than it used to be.

THREAD: My Zapruder breakdown of the Chauncey Gardner-Johnson/Javon Wims beef.

It begins on this play on the Bears’ first possession of the second half. After exchanging some words, CJGJ rips Wims’ mouthpiece off and it falls onto the ground. pic.twitter.com/wwQgcbKdJ5

Here's what may – and most likely – have provoked Wims to start throwing punches at Chauncey Gardner-Johnson. The play before, he appears to try to poke receiver Anthony Miller in the face/eye. #Bears pic.twitter.com/mNj64pHToV

“There’s a lot of, he say, she say,” Gardner-Johnson said Monday when asked about the incident with Wims, per Saints beat writer Amie Just. “Nothing happened, nobody got spit on. I know it should be nowhere on the field of play when a game is going on.”

He also blamed his childish behavior on football being a “chippy” sport:

“I play football. It’s football, guys get chippy,” Gardner-Johnson said. “I don’t want to tell you like, I wouldn’t be there if I’m not me. So, I’m not going to change for anybody. I’m out there playing football so if they go farther than that, I don’t get in between with that, it had nothing to do with me.”

Wims Has Been Suspended for 2 Games, Will Appeal Tuesday 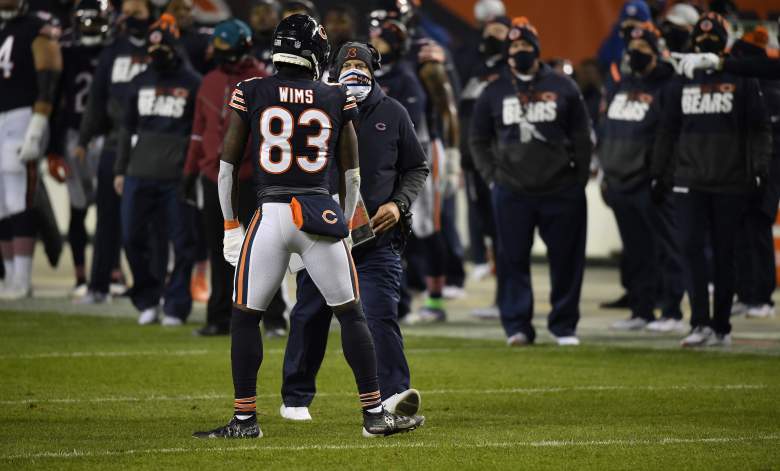 GettyBears head coach Matt Nagy talks with Javon Wims after he was disqualified from the game against the New Orleans Saints. (Photo by Quinn Harris/Getty Images)

Bears rookie wideout Darnell Mooney said the following about Wims Monday when speaking to the media: “I know he’s a good guy. Whatever happened in the game, it’s an emotional game. I love him … Nobody knows what happened at that time besides those two. Hopefully we can move forward.”

Bears head coach Matt Nagy let it be known multiple times after the game that he wasn’t pleased with Wims, but he did say Monday that he and the wideout had spoken, and that Wims was remorseful.

Nagy said he spoke with Javon Wims today, saying: "He was apologetic and knows that no matter what you can't do what he did."

Wims was suspended by the NFL for two games, and he plans to appeal the suspension.

Chauncey Gardner Johnson had quite a bit to say about Bears WR Javon Wims.