The Chicago Bears were one of six NFL teams who sent representation to watch the Florida vs Arkansas game this past weekend. The likely draw there, of course is the quarterback of the No. 6 Florida Gators, Kyle Trask, who put on a show in the Gators’ 63-35 victory. The Draft Network’s Jordan Reid reported seeing Bears’ reps at the game, and it wasn’t hard to connect the dots as to who they were there to see.

Trask went 23-29 for 356 yards and six touchdowns in the win over Arkansas, and considering how stacked this draft class already is at quarterback, the Florida quarterback may be one of the most realistic options for the Bears in the draft next year. With Trevor Lawrence, Justin Fields, Trey Lance and BYU’s Zach Wilson all likely going earlier in the first round, Trask should still be available when it’s Chicago’s turn to pick later in the first or possibly in the second round.

Kyle Trask Stats: His Arrows Are All Pointing Up… 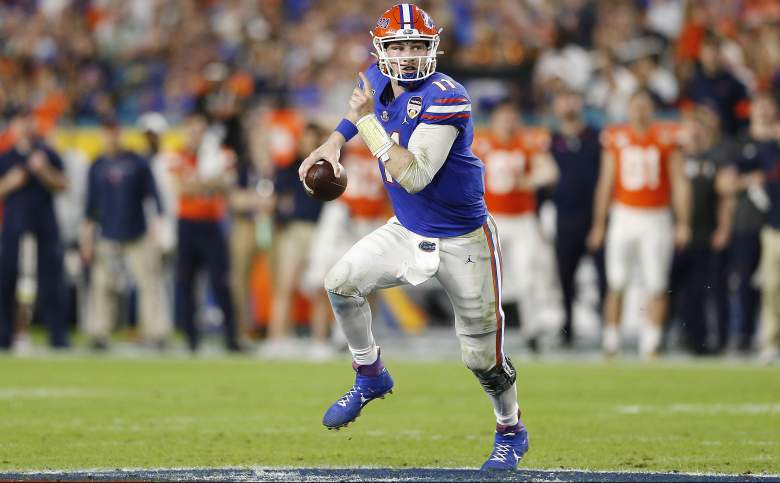 Trask didn’t play as a freshman in 2017, and a knee injury ended his season early in 2018. He took over in 2019 after then-starter Feleipe Franks went down with an injury, and he hasn’t looked back since. In 12 starts last season as a junior, Trask completed 66.9 percent of his passes for 2,941 yards, 25 touchdowns and seven interceptions. He also led the team to victory in the Orange Bowl against Virginia, going 24-39 for 305 yards, a touchdown and an interception in the win.

In his second full season as a starter at Florida, Trask has come into his own, and he’s currently a top Heisman contender. So far, through his first six games of the season, Trask is 148-211 for 2,171 yards, 28 touchdowns and three interceptions. His 28 scores through the air is No. 1 in the nation, and he’s also ranked seventh in passing efficiency and fourth in passing yards per game (361.8).

What Are Analysts Saying About Kyle Trask?

ESPN’s Jeremy Fowler had some extremely flattering things to say about Trask, comparing him to this year’s top draft prospect, Joe Burrow. He also has more passing touchdowns through his first six games this season than any other quarterback in SEC history — including Burrow and Tua Tagovailoa.

“Kyle has turned into a beautiful passer,” former Florida head coach Steve Spurrier said about Trask recently. “He finds guys who are a little bit open and puts the ball right on the money. He is having a Joe Burrow kind of year.”

Kyle Trask has some Joe Burrow to him – lack of major arm strength won’t deter him from placing the ball anywhere due to confidence, accuracy and decision-making. Ton of intangibles as well.

Trask also led Florida to an upset of then-No. 5 Georgia just over a week ago, so he’s definitely someone to keep an eye on moving forward if you’re a Bears fan.

Kyle Trask with an UNREAL dime 😱

No. 8 Florida upsets No. 5 Georgia

READ NEXT: Bears Add Play-Making RB to Active Roster Before Matchup vs Vikings

Read More
Mitch Trubisky, NFL, Nick Foles
The Bears were one of six teams in attendance at his game this weekend.