Getty The Bears added DT Anthony Rush to their active roster on November 10. They waived him November 24, and their biggest rivals scooped him up the next day. (Photo by Eric Espada/Getty Images)

After losing key backup Roy Robertson-Harris for the season, the Chicago Bears have gone out and added some depth to their defensive line, signing defensive tackle Anthony Rush to their 53-man roster, the team announced Tuesday. Rush started the season on the Seattle Seahawks’ practice squad, and he was moved up to their active roster Week 2. He played in four games before being waived by the Seahawks October 27. Now, he has landed in the Windy City.

We have signed DT Anthony Rush to our active roster and QB Kyle Sloter to our practice squad.@Hyundai | #DaBears

Rush signed with the Philadelphia Eagles as an undrafted free agent in the spring of 2019, but the team released him a few months later. He was signed to the Raiders’ practice squad shortly after, but didn’t make the team’s final roster. The Eagles picked him up again in October of the 2019 season, and he played in nine games that year in a backup role. He has 14 tackles, three tackles for loss, a quarterback hit and a half-sack in 13 career games.

With Robertson-Harris having season-ending shoulder surgery, the Bears will increase the playing time of Mario Edwards Jr., who has been playing well in limited opportunities. With Edwards now getting the nod on the right side of the line, Rush should slide into his vacated role, and will likely play no more than 10-15 percent of the snaps, which would be consistent with what he has done in the past with the Eagles and Seahawks.

Rush played his college ball at UAB. In two seasons at Alabama-Birmingham, he had 77 tackles, 20 tackles for loss, two sacks, an interception and two forced fumbles. At 6-5 and 350 pounds, Rush will be a big body who should be able to step in on select downs, particularly when the Bears are looking to stuff the run. With defensive tackle John Jenkins also nursing an ankle injury, it’s unclear exactly how much Rush will see the field.

A Look at the Re-Vamped Bears D-Line… 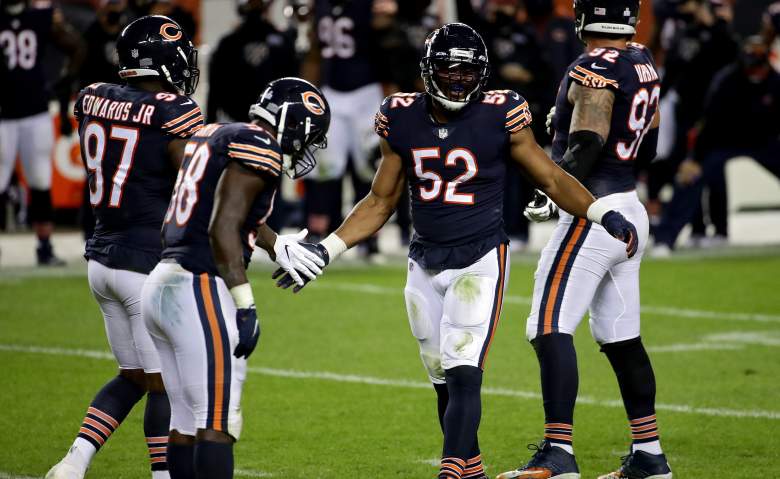 GettyThe Bears defensive line is going to look a bit different with Roy Robertson-Harris out for the year.

After nose tackle Eddie Goldman opted out this season, the Bears have been trying to fill the void he has left, and they haven’t had an easy time. While Bilal Nichols has been filling in capably, the injuries of Jenkins and Robertson-Harris have been huge. Akiem Hicks has been stalwart at left defensive end, with Brent Urban backing him up capably, and now, Edwards will start on the right side of the line, with Rush likely filling in behind him.

The Bears elevated former Steelers nose tackle Daniel McCullers for their Week 9 game against the Tennessee Titans, but they moved him back to the practice squad after the game. Thus, Rush could play his first game for Chicago against the Vikings next Monday night.

The Bears have added defensive help in the wake of Roy Robertson-Harris' injury.