At 5-1, the Chicago Bears still don’t have a ton of fans or analysts believing in them, and with good reason. The Bears have barely beaten a bunch of bad teams (Lions, Falcons, Giants), and every one of their games seems to come down to the very last possession. There’s also the quarterback situation.

After Mitch Trubisky was benched in favor of Nick Foles midway through the third game of the season, Chicago’s offense didn’t get the huge boost many assumed Foles might bring. There are valid concerns about Matt Nagy’s play-calling and the easily penetrable offensive line — both of which have been problematic — but there are also valid concerns about the quarterback position.

While he can read defenses and lead a team (and an offense) better than Trubisky, Foles still hasn’t been the most accurate quarterback around, and his durability and injury history remain concerns, as he has never started more than 11 regular season games. Thus, when the Miami Dolphins announced Tuesday they were benching veteran quarterback Ryan Fitzpatrick in favor of rookie Tua Tagovailoa, a few analysts threw the Bears out as a possible landing spot for Fitzmagic.

Analysts Think Fitzmagic Could Take Off in Chicago…

Lee Sharpe of Pro Football Focus started it, but Jason Fitzgerald of Over the Cap also named Chicago as a possible destination for Fitzpatrick, as did some fans who see the big-bearded veteran as a good fit in the Windy City.

Ryan Fitzpatrick to the Bears, who says no?

Trading for Fitzpatrick would require a team to have about $5M in cap room. Cowboys and Browns both have that as teams that maybe could look at a QB, especially dallas. Bears I guess could throw another body in the mix. Cant see Eagles.

Dream scenario is that Ryan Fitzpatrick gets trade to the Bears. Seeing him in a Nagy offense throwing to Allen Robinson should be a blast. Plus we can get playoff Fitzmagic.

I’d like to see Ryan Fitzpatrick be traded to the Bears. That is all.

Brad Spielberger of PFF — who is also a Bears fan — joked that Fitzmagic may fizzle out in a city notorious for getting it wrong at the quarterback position.

One fan suggested Fitzpatrick could really help the Bears’ offense and be an actual difference-maker, and Sharpe agreed, noting it was a shame, because Chicago very likely won’t pursue him.

I'm sure they don't, and that's really the most depressing part. 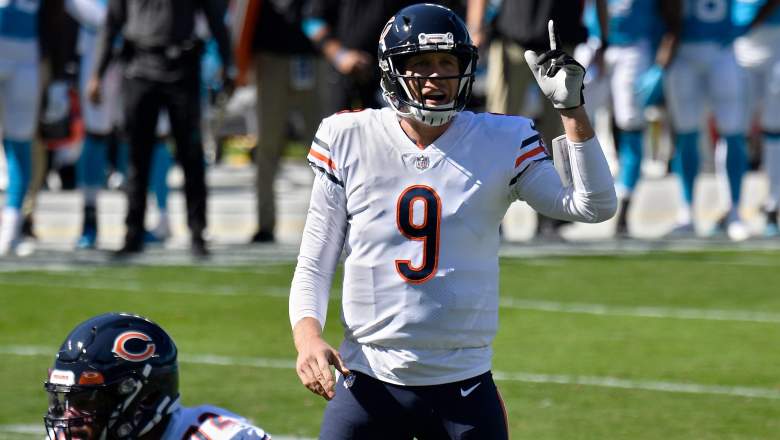 Foles is 2-1 as a starter for the Bears this season, while Fitzpatrick was 3-3 in his time starting for the Dolphins, but considering how well he was performing statistically, his benching in favor of Tua came as a bit of a surprise. Here’s a look at the numbers both Foles and Fitzpatrick have put up so far in 2020:

Nick Foles (four games, three starts): 95-152 for 878 yards, six touchdowns and four interceptions (62.5 completion percentage). Foles has averaged 5.8 yards per attempt, a QBR of 49.9 and his longest completion has been for 37 yards. He has been sacked four times.

Sure, Foles has played in two fewer games, so his stats reflect that, but the glaring difference between the two has been accuracy — it’s clear Fitzpatrick is the more accurate passer, at least so far this season.

But Sharpe was correct — the Bears trading for Fitzmagic is about as likely as Matt Nagy turning over play-calling duties. Barring a miracle, it very likely won’t happen. Trubisky is still the No. 2 quarterback, and he’s not going anywhere.

Still, it’s a fun image to toss around: The bearded, Hawaiian shirt-wearing wonder landing at Soldier Field and leading the team to postseason glory with a big arm and a lot of attitude. The only quarterback to win a Super Bowl with the Bears had personality for days, and that may be the kind of quarterback Chicago needs. Instead, they’ll ride with Foles, who has been known to make some postseason magic of his own.

READ NEXT: Ex-Bears LB Un-Retires, Returns to NFL After: Report