Getty The Chicago Bears have added WR and returner Dwayne Harris to their 53-man roster. (Photo by Daniel Shirey/Getty Images)

The Chicago Bears may be looking to end the Ted Ginn as punt returner experiment. After Tarik Cohen went down for the year with a torn ACL, Chicago has been sorely missing a return specialist on punts. All-Pro Cordarrelle Patterson handles kickoff duties, but it would be nice if the Bears had some depth in the kickoff and punt return departments.

Per NFL analyst Aaron Wilson, they may have their eyes on someone to fill that role. The Bears plan to try out wide receiver and return specialist Dwayne Harris, according to Wilson’s daily list of league visits and workouts.

Dwayne Harris Made Pro Bowl in 2016 as Returner With Giants

Harris was taken in the sixth round of the 2011 NFL Draft by the Dallas Cowboys. He spent his first four seasons in Dallas before signing a five-year, $17 million contract with the New York Giants, where he made the Pro Bowl as a kickoff returner in 2016. He fractured his foot late in 2017, and he was released by the Giants the following season.

He caught on with the Raiders for the 2018-19 seasons, and he spent some time on the Texans’ practice squad earlier this year before being cut. The 5’10, 215 pound Harris has also played wide receiver, and he had a solid season with New York in 2015, when he became the first player in team history to score a touchdown on a punt return, a kickoff return and a catch. 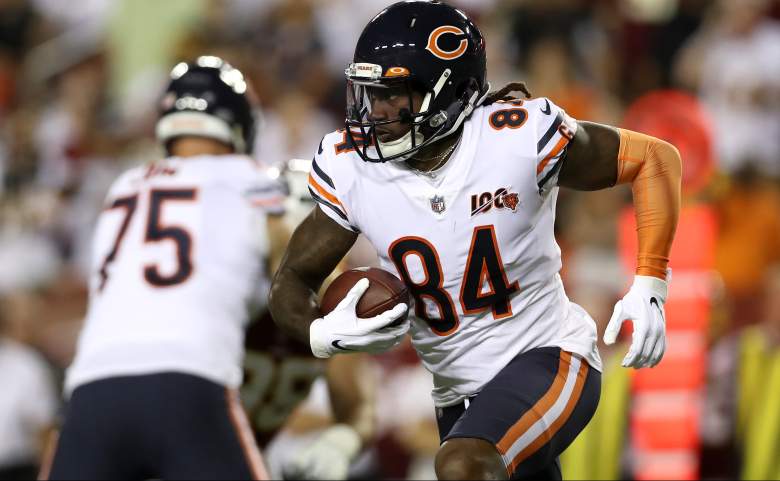 GettyChicago Bears kickoff returner and special teams ace Cordarrelle Patterson has been an invaluable member of their team since his arrival in 2018. Now, he needs a backup. (Photo by Rob Carr/Getty Images)

Harris, like Patterson, has returned kicks while also serving as a gunner, and he has been quite effective as a special teams player over the years. He has been named Special Teams Player of the Week six times over his nine-year career, and he has four punt returns for touchdowns and one kickoff return for a score. Considering how little they’ve used Ginn, it wouldn’t be a surprise to see the Bears release the cagey veteran in favor of Harris if he looks good during his workout.

As a receiver, Harris has 77 catches for 874 yards (that’s 11.4 yards per reception) and eight touchdowns. Perhaps his primary issue is ball security. He has 15 fumbles in nine years, which considering his limited usage, is a bit concerning. Still, he’s a better option than Ginn in terms of punt returners, so don’t be surprised if the Bears add him in some capacity.

Loading more stories
wpDiscuz
0
0
Would love your thoughts, please comment.x
()
x
| Reply
The Bears could be looking to find their Tarik Cohen replacement...