For a while, it was the talk of the Bulls’ offseason. The team had overhauled the roster with the addition of point guard Lonzo Ball and wing DeMar DeRozan, but one big question seemed to hang over Chicago’s summer: How, exactly, would a scoring guard like DeRozan fit with a scorer like Bulls star Zach LaVine?

DeRozan mocked the idea that he would not work well with LaVine last month. And, speaking to Heavy.com, LaVine took the same position on the “fit” question.

DeMar DeRozan: "It's basketball. Lot of people I see criticizing, talking about 'fit this, fit that' have probably never even played basketball… for me, if everybody is on the same page mentality and wants to win, it don't matter about a fit."

“I don’t get that at all, because that’s just outside narratives,” LaVine said. “At the end of the day, we are some of the basketball players in the world and we know how to make something work. It’s our job to get out there and get to know each other, obviously personally and as a basketball player. It’s easy to make things work on the basketball court if you all have the same intent, and that’s winning.

“I don’t think anybody on this team is selfish. With that, going forward, if that is the standard, we’re going to figure out everything because we’re too good of basketball players, we work too much, we care too much about the game for it not to.”

LaVine is coming off a career year for the Bulls, averaging 27.4 points on 50.7% shooting and 41.9% 3-point shooting. He added 5.0 rebounds and 4.9 rebounds per game. Coming into this season, though, he finds himself in the odd position of being the last guy standing from the 2017-18 season, when he first joined the Bulls.

Denzel Valentine and Lauri Markkanen were his only teammates remaining from those days. Both wound up signing with the Cavaliers this offseason.

#Cavs Lauri Markkanen has settled in on west side. He's worked out with new teammates. On his first day, a coach demanded he shoot the ball.
After four years of ups and downs in Chicago, he gets the fresh start he wanted. Cleveland is his proving groundhttps://t.co/4uXzKT1iTJ

In addition to DeRozan, Ball figures to earn a spot in the Bulls’ starting five. LaVine is older, but has a connection with Ball through their UCLA ties:

He was a very high-profile player coming out of high school so when he went to UCLA, I knew him through that and then obviously, just through the league,” LaVIne said. “You meet somebody, you watch their game, I am a student of the game, so you see the guy out there who really know how to play. He has different aspects of the game that he does where he is not one-dimensional. Great defender, incredible passer, great basketball IQ, and he is a worker. He has been through different situations where, obviously, with his name, he has gone through some things where he had to learn some things about himself. But he has done that and gotten better and better and reached bigger and bigger heights.

LaVine won a gold medal with Team USA in Tokyo this summer, and is featured in new Mountain Dew commercials, as well as making an appearance in the NBA2K’s new “Dew Zone” feature. But he is putting all that behind him now to begin ramping up for the season. 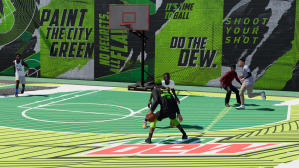 He has a lot at stake. Coming off his first All-Star appearance, LaVine is looking to break a personal drought—in seven years in the NBA, he has never appeared in the playoffs. If the Bulls can sort out their rotation and chemistry, this roster should be good enough to change that.

“I think we all have the right mentality going into it,” LaVine said. “We all have to be ourselves and learn how to be a team. There will be roles that will have to be established but at the end of the day, that is what we are out here to do, collectively to win.”