Drake released his much-anticipated video for Laugh Now Cry Later on Thursday evening and Cleveland Browns wide receiver Odell Beckham Jr. was one of a few high-profile athletes to make a cameo.

In the video, Drake runs routes and catches passes from Beckham at the Nike World Headquarters in Oregon. In the short clip, the rapper lays out and does his best impression of OBJ’s gravity-defying one-handed grab from 2014. Beckham also shows up later in the video doing some dance moves and laughing.

Odell Beckham, Drake Have History and Were Once Roommates

Beckham and Drake have been friends for quite some time, and were even roommates at one point in 2016. Beckham said he and the rapper and a lot in common, leading to them sharing a roof.

“It’s somebody whose mindset is the same as yours and they want nothing but success. They want to be the best. We just click on a level like that. And this really was the start of a becoming friendship that’ll carry through a lifetime,” Beckham said.

Beckham is coming back from offseason core surgery. He didn’t miss a game last season, but played through multiple injuries during his first season in Cleveland, most notably to his hip and groin. It was also reported at one point that Beckham was playing through a sports hernia. Despite breaking the 1,000-yard barrier last season, he did not live up to the wild expectations set for him. Beckham finished his first season in Cleveland with 1,035 yards and four touchdowns. However, he was basically playing from behind from the get-go due to injuries. 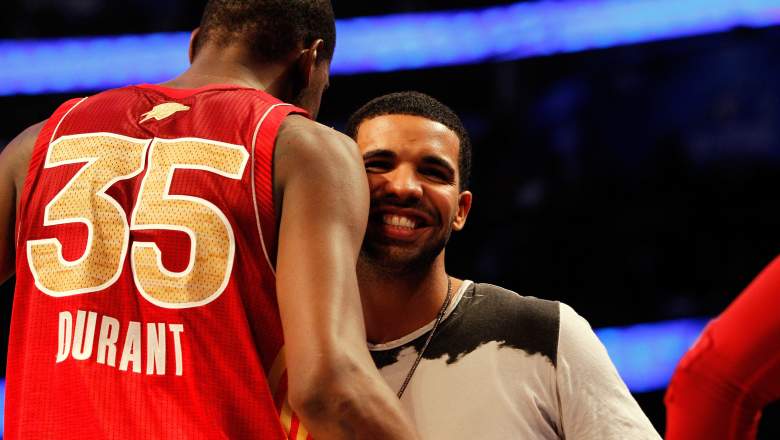 Beckham is not the only athlete to make a cameo in the video. Brooklyn Nets star Kevin Durant put up some shots with Drake, while former Seattle Seahawks running back comes in and tackles the rapper.

Durant and the rest of the Warriors players had quite the battle with Drake during the 2019 NBA Finals, with the Canadian-born rapper cheering for the Raptors — a team he is the “global ambassador” for. Toronto went on to win the series and their first NBA title and Durant suffered an Achilles injury in Game 5. While Drake and Durant had words on the court, he offered his sincere best wishes to the 10-time All-Star after he went down.

“Was tough for any of us to even enjoy that game tonight after seeing this transpire. Praying for our brother,” he posted alongside an image of Durant on Instagram. “My only concern tonight is your wellbeing. ‘The game needs me’ is an understatement when it comes to 35. Please wish the best for this true warrior.”

Durant bests him on the court, before Lynch comes in and drops Drake with a hard hit. It’s part of a comical downward spiral for Drake in the video.

“Get the f— off the block man,” Lynch yells after the tackle. “What the f— wrong with you.”