Baker Mayfield showed up to Cleveland Browns training camp in the best shape of his career, shedding some bad weight and adding muscle.

Mayfield has drawn praise for the work he put in during the offseason, but that didn’t stop Odell Beckham Jr. from having a little fun with it.

“He looks great. He’s got like a four-pack now,” Beckham joked while talking to reporters. “As a teammate and have always been a fan of Bake, it’s good to see him in this place now.”

#Browns Odell Beckham Jr. on chemistry with Baker Mayfield: "He looks great. He's got like a 4-pack now. As a teammate and have always been a fan of Bake, it's good to see him in this place now."

Mayfield posted multiple videos during the offseason working out in his native Austin, Texas. The QB even hosted some of his Browns teammates for some training sessions amid the pandemic.

“My emphasis was definitely cutting out the bad body weight. I think the bigger number was definitely the drop in weight of the bad pounds. That was my emphasis,” Mayfield told reporters at the start of camp. “I was able to physically get my body health and ready to roll.” 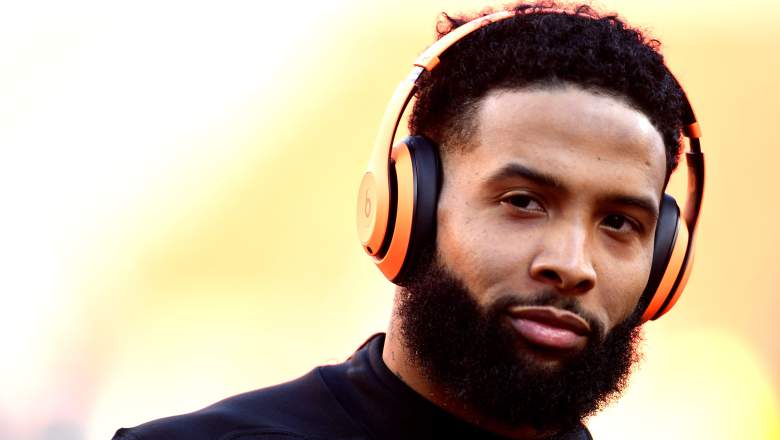 It was just a playful jab from Beckham, who Mayfield expects to have much better chemistry with this year thanks to a more complete training camp together.

“It’s sure as hell going to be a lot better than last year,” Mayfield said of his chemistry with Beckham, per NFL.com. “We’re just on the same page, things we talked about. There was a lot going on within the building last year. We’re not going to get into that, but we’re both in a better state. He’s healthy; surgery was successful, thank God. He’s feeling great. He’s in a great state of mind.”

Both Beckham and Mayfield are seeking bounce-back seasons after the disappointing 6-10 campaign the Browns produced last season.

Despite breaking the 1,000-yard barrier last season, he did not live up to the wild expectations set for him. Beckham finished his first season in Cleveland with 1,035 yards and four touchdowns. However, he was basically playing from behind from the get-go due to injuries.

After a stellar rookie season, Mayfield passed for 3,827 yards, 22 touchdowns and 21 interceptions, ranking next-to-last in both passer rating (78.8) and completion percentage (59.4%).

Beckham has been bullish on his prospects for this season, even coming out on his YouTube channel and saying it could be his best year yet. So far, OBJ has been a model citizen in training camp and stunning his new coaches, like offensive coordinator Alex Van Pelt.

“Obviously the freak nature of his athleticism, he can do a lot of things guys can’t do,” Van Pelt told reporters. “Getting in and out of breaks, change of direction … I haven’t seen a change of direction like that. He can start and stop on a dime. He can fly down the field, too, when he turns it loose and starts to run, he can outrun arms with his speed. And his ability with his ball skills, the catches that he makes on the go balls, the crazy one-handed catches.”

“I definitely like him,” Beckham said, per the Akron Beacon Journal. “As far as our relationship, it’s great. It’s more private and we just talk, text, talk football. He loves this game of football. He’s going to do everything in his power to put this team in the best position to succeed. We all have an exciting opportunity in front of us.”

Loading more stories
wpDiscuz
0
0
Would love your thoughts, please comment.x
()
x
| Reply
Cleveland Browns Odell Beckham Jr. had some thoughts about the shape his quarterback Baker Mayfield showed up to training camp in.