Odell Beckham Jr. will be on the field when the Cleveland Browns take on the Pittsburgh Steelers this week, with all of his tests following an illness coming back negative for COVID-19.

Among those pumped to see that Beckham will be active is Hall of Fame defensive tackle Warren Sapp, who had a message for OBJ.

Beckham has had a resurgent season in Cleveland after failing to live up to expectations during his first year in orange and brown. He has 236 yards and three touchdowns, but those numbers are deceiving, as the Browns have used him in a variety of ways. Head coach Kevin Stefanski expected for Beckham to be a full-go, despite missing practice Thursday and Friday.

“He was out here Wednesday and got some good work in Wednesday,” Stefanski said. “He’s been in meetings virtually. (Pass game coordinator/wide receivers) Coach (Chad) O’Shea is going to spend extra time with him in those meetings. If all goes according to plan for tomorrow, you spend even more time and you spend even more walkthrough time. I think there’s enough time to catch him up, barring his health.”

Warren Sapp: Cam Newton Pouted Like a B**** After SB50 Loss, OBJ Isn't Great (Part 5)Watch Part 4: https://goo.gl/rfWF5G Part 1: https://goo.gl/SPzXwV —————- In this VladTV exclusive, Warren Sapp spoke on filing bankruptcy, simply saying it happened because it needed to be done. Along with that, Sapp talked about investing his money and changing his financial habits. Sapp pointed out that he filed Chapter 7 bankruptcy and that his finances…2018-11-05T18:22:17Z

Sapp and Beckham have some history and most of it involves the Super Bowl-winning defender being critical of the Browns pass-catcher. Sapp called out Beckham after he made noise last season by wearing a $350,000 watch on the field.

“You can’t wear a $350,000 watch and play like a $2 bill,” Sapp told USA TODAY Sports. “That don’t get it done. It was a nice-looking watch. Matched the uniform and everything. But I’d love to see you in the end zone, dancing or something. C’mon, man.”

Sapp also questioned Beckham’s talent while he was in New York.

“What makes him great?” Sapp said in 2018. “I beg anybody to show me the greatness in him.

“The money makes you great? Jarmacus Russell was great as hell when he got his $30 million dollars. And what’s his numbers this year? Is he playing great? Are the Giants playing great? Is there anything great in New York other than Sam Darnold right now?”

Beckham responded to that criticism by scoring on Sapp’s former team, the Tampa Bay Buccaneers, and then doing Sapp’s touchdown dance.

“I heard Warren was talking bad about me or something. Somebody told me,” Beckham told reporters. “I don’t know what he said or anything like that, so I just had to give him a little love. When people hate on you, you have to give them a little love.” 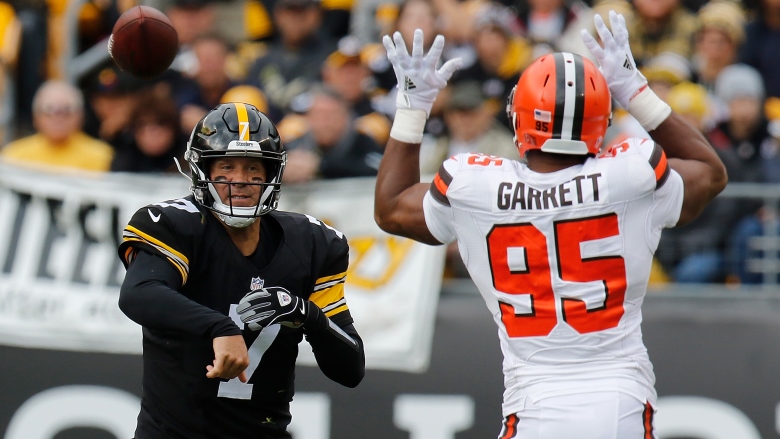 Justin K. Aller/Getty ImagesBen Roethlisberger of the Pittsburgh Steelers attempts a pass as Myles Garrett of the Cleveland Browns defends.

The Browns and Steelers are a combined 8-1 this season, so the matchup has playoff — and AFC North — implications, with the Ravens also sitting at 4-1. Browns defensive end Myles Garrett called the game a “defining” one for Cleveland.

“This will be a defining game,” Garrett said. “How the rest of the season plays out will probably rest on this game because of how important it plays for who will be up in the division and who will fall.”

The Browns are a 3.5-point underdog for the game, with the total set at 51 points, per Odds Shark.

Read More
Football, NFL
Among those pumped to see that Odell Beckham Jr. will be active against the Steelers is Hall of Fame defensive tackle Warren Sapp, who had a message for OBJ.