The days we’ve been living in for the better part of two years have been filled with uncertainty, to say the least.

One way or another, the global pandemic has impacted us all.

While it may seem trivial in the grand scope, we’ve also seen how the pandemic can affect professional sports teams. The Broncos know all too well how disruptive COVID-19 can be to a team. They have had several players on the COVID-19 reserve list just this week.

As numbers seem to be spiking, again, the NFL is getting hit particularly hard.

Last season, due to COVID-19, the Broncos were forced to play a practice squad wide receiver at QB. With the recent surge in cases, we could see similar scenarios play out across the league, even with the NFL’s updated protocols.

One such scenario is unfolding in Washington right now, and it has ties to the Broncos.

ALL the latest Broncos news straight to your inbox! Join the Heavy on Broncos newsletter here!

Perhaps the team hit hardest by the recent spike in COVID-19 cases has been the Washington Football team.

As of Friday afternoon, Washington has 21 players on the COVID-19 reserve list. That list includes both Washington’s starting and backup quarterbacks in Taylor Heinicke and Kyle Allen.

Allen was placed on the Covid-19 list at the start of the week, so there’s still a little time for him to pass protocols and play on Sunday for Washington against the Philadelphia Eagles.

However, if Allen can’t go Sunday, Washington is ready to turn over the QB reins to Kyle Shurmur, son of Bronco’s offensive coordinator, Pat Shurmur.

Right now, it would be Kyle Shurmur starting for the #WashingtonFootball Team against the #Eagles on Sunday. Unless Kyle Allen can test out of the protocol by tomorrow.

After a standout career at Vanderbilt, where he set school records in touchdown passes (64), passing yards (8,865), pass completions (722), and pass attempts (1,264), Kyle Shurmur signed with the Kansas City Chiefs as an undrafted free agent in 201. Shurmur was still a member of Kansas City’s practice squad when they won Super Bowl LIV.

He was released by Kansas City in the offseason, then had a brief stay with the Broncos, before signing on with the Cincinnati Bengals practice squad in 2020. Ahead of the 2021 season, Shurmur would sign with the Washington Football Team and be placed on the practice squad where he remains today.

Shurmur has yet to see regular-season action in the NFL but could get his first dose of it this week, under unfortunate circumstances.

While a devastating COVID-19 spike may offer a shot at playing time for his son Kyle Shurmur in Washington, Broncos offensive coordinator Pat Shurmur has already had his run-in with COVID-19 this season. 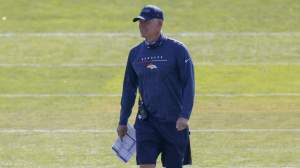 Back in mid-November, Coach Shurmur tested positive for COVID-19. Coaches are required to be vaccinated around players, so it was assumed that Shurmur was indeed vaccinated. Nevertheless, the positive COVID-19 test kept the Broncos’ play-caller off the sidelines in a Week 10 loss to the Eagles.