Getty Kevin Durant reacts during Game 3 of the 2017 NBA Finals between the Golden State Warriors and the Cleveland Cavaliers.

The NBA‘s annual free-agent feeding frenzy officially tipped off on Thursday and, already, the Golden State Warriors look to have some obstacles in keeping their championship roster together. According to The Athletic‘s Jovan Buha, the LA Lakers have identified several Dubs free agents as potential targets.

However, the biggest move to occur on the first day of free agency came in Brooklyn, where former Warrior and future Hall of Famer Kevin Durant made a direct trade request to Nets owner Joe Tsai, as reported first by ESPN’s Adrian Wojnarowski.

While they may or may not have sympathy for the Brooklyn faithful, the whole of Dub Nation definitely understands what their East Coast counterparts are going through.

Durant, of course, won two titles over three seasons with the Warriors from 2016 to 2019. However, his final go-round with the team ended in failure as both he and Klay Thompson suffered devastating injuries in the NBA Finals and the Toronto Raptors went on to capture the chip.

Afterward, Durant left Warriors chairman and majority owner Joe Lacob flabbergasted when he opted to flee the Bay and join BFFs Kyrie Irving and DeAndre Jordan with the Nets. And fans were similarly thrown for a loop considering all KD had accomplished alongside Stephen Curry, Thompson and Draymond Green in Dubs blue.

Just like that, an upstart Nets squad had taken a seat at the contender’s table with Durant as its centerpiece. Unfortunately, a number of key injuries, James Harden’s decline and Kyrie Irving’s anti-vax stance conspired to keep the club out of the title picture, even as it was branded as a favorite before each of the last two seasons.

Is a Dubs Reunion Possible?

With Durant’s tenure in Brooklyn suddenly nearing its end — less than a year after he signed a massive, multi-year contract extension with the club — many have wondered whether the Warriors could bring him back into the fold and get back into the business of super-teaming.

Opinions differ on the actual likelihood of a reunion. For his part, though, longtime NBA reporter Tom Haberstroh indicated that Lacob would relish the chance to bring Durant back into the fold during an appearance on NBC Sports‘ Brother From Another.

“Would the Warriors do it? I think so,” declared Haberstroh. “They have held those young assets for what? Who are you getting? Is it Pascal Siakam? No — we’re holding that for when KD comes on to the table; that type of player.”

Per Woj, the Phoenix Suns and the Miami Heat are the teams known to be on Durant’s wish list. 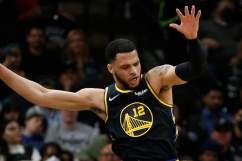