Getty Stephen Curry and Kevin Durant laugh together following a 2021 game between the Golden State Warriors and the Brooklyn Nets.

Free agency has already been incredibly eventful for the Golden State Warriors, who suddenly find themselves with a slew of roster spots to fill. Although the club was able to re-up with its biggest offseason priority in Kevon Looney, Bob Myers and his brain trust were less successful with Gary Payton II and Otto Porter Jr.

Payton looks to be joining the Portland Trail Blazers on a three-year deal worth $28 million, while the Toronto Raptors are signing Porter to a two-year pact, presumably using part of their MLE. Elsewhere on the roster, Chris Chiozza and Juan Toscano-Anderson were given their walking papers as well.

However, the biggest news of early free agency (and the summer, really) is that former Dub Kevin Durant has requested a trade from the Brooklyn Nets. And while opinions are mixed on whether such a move would be possible — or even advisable — pundits are already talking about a Bay Area return for the 12-time All-Star.

“I’m going with Golden State,” ESPN’s Kendrick Perkins said of KD’s landing spot, as relayed by ClutchPoints. “They will run it back. If they can find a way to do some type of trade that involves Andrew Wiggins and bring Kevin Durant back, I would love to see it. Hell, I think they would love to see it.”

The Warriors may just have the pieces to get it done, too.

Mega-Deal Ushers In a KD Reunion

While we’re not advocating for the Warriors to make a play for Durant, the following deal could be enough to facilitate his reunion with Stephen Curry, Klay Thompson and Draymond Green:

There is, of course, one HUGE caveat to this particular deal. Per NBA rules, teams are not allowed to roster two players who are on designated rookie extension contracts. As it stands, the Nets already have one such player in former No. 1 overall pick Ben Simmons.

So, with Wiggins having signed a similar extension back when he was with the Minnesota Timberwolves, Brooklyn won’t be able to take him in any deal unless Simmons is moved first.

If that particular hurdle could be cleared, though, the Nets would replenish some draft assets, add a pair of prospects with incredible upside in Wiseman and Moody and bring an All-Star in his prime to the East Coast in Wiggins. Or, if they need more star potential, they could ask for Jonathan Kuminga or Jordan Poole instead of Moody.

Meanwhile, the Warriors would be getting a future Hall of Famer who, even at age 33 (almost 34) can get buckets better than just about anyone in the Association. Last season, Durant averaged 29.9 points, 7.4 rebounds and 6.4 assists per contest while making 38.3% of his triples.

We already know how well he can work with Curry, too.

Among two-man combinations playing 300-plus minutes together during the Warriors’ previous championship season in 2018, the Durant-Curry tandem boasted a team-best offensive rating of 121.4, and opponents were outscored by 12.0 points per 100 possessions when the two were on the court together.

Is It Really a Possibility, Though?

Labeling this kind of trade as a longshot is probably understating the matter. The financial side of it alone would be insane — factoring in Looney’s new deal, which should pay him right around $7.9 million next season as a starting salary, the Warriors already have almost $179 million committed to just nine players.

Mind you, that’s not considering repeater tax penalties that will more than double the amount.

This trade would drop the overall number a couple of mil., but then Golden State would be left with just seven players under contract, and precious few resources to round out the roster. And, again, Brooklyn having to move Simmons out to in order to even execute the trade is something to contend with as well.

Finally, Myers and team chairman Joe Lacob have, on multiple occasions, expressed their belief in the current dual-timeline approach the Warriors are taking. To ship out so much young talent for an aging superstar in Durant would completely fly in the face of that strategy. 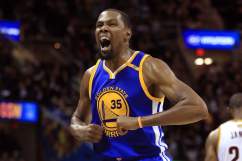 No. Just… no. We just won a championship, we don’t need an aging superstar like Durant (have enough of those). Let’s not sacrifice the future for a single player, and leave ourselves vulnerable to having multiple seasons derailed by a single injury. We can continue bringing the next generation along, while backfilling the front line with undervalued role players who want to be part of a winning formula.

Loading more stories
wpDiscuz
1
0
Would love your thoughts, please comment.x
()
x
| Reply
If the Golden State Warriors want to make a Kevin Durant reunion happen, this trade might get it done.