Richard Sherman has been one of the best coverage corners in the NFL since his arrival in 2011, and he’s slated to be a free agent for the second time. With the three-time All-Pro and five-time Pro Bowler now available, the Green Bay Packers have been named as a prime landing spot for the defensive back.

Sheil Kapadia of The Athletic thinks the Pack could find a solid replacement for pending free agent corner Kevin King on the market in Sherman, who is no stranger to Green Bay or quarterback Aaron Rodgers.

ALL the latest Packers news straight to your inbox! Join the Heavy on Packers newsletter here!

Sherman Would Be ‘Good Scheme Fit’ in Green Bay

In his latest piece for The Athletic, Kapadia shared his predicted free agent moves for several NFL teams this offseason, and he predicted Sherm would gave a ‘G’ on his helmet next season.

“Sherman will be 33 at the start of next season and appeared in only five games with the 49ers last year because of injury,” Kapadia said. “But there’s definite upside with him. Sherman has performed at a high level when healthy and made the Pro Bowl in 2019. He’d be a good scheme fit in Green Bay, where the Packers will be looking to replace Kevin King. Sherman and Jaire Alexander would offer a dynamic corner pairing.”

Sherman has been bitten by the injury bug a few times over the last several seasons. He ruptured his Achilles tendon in 2017, and he missed 12 games last year nursing a calf injury. Still, he has been one of the better man-cover corners in the league over his 10 seasons, and he should still have a few solid years left.

He started 29 games for the 49ers during the 2108-19 seasons, with his 2019 campaign standing out. The Super Bowl-winning corner started 15 games, and Pro Football Focus gave him a 90.1 coverage grade that year. He allowed opposing quarterbacks a passer rating of 46.8 and gave up 8.4 yards per catch to receivers, and he missed just four tackles all season. He also snagged three interceptions, had six pass breakups, and he gave up just 67 yards after-the-catch all year. 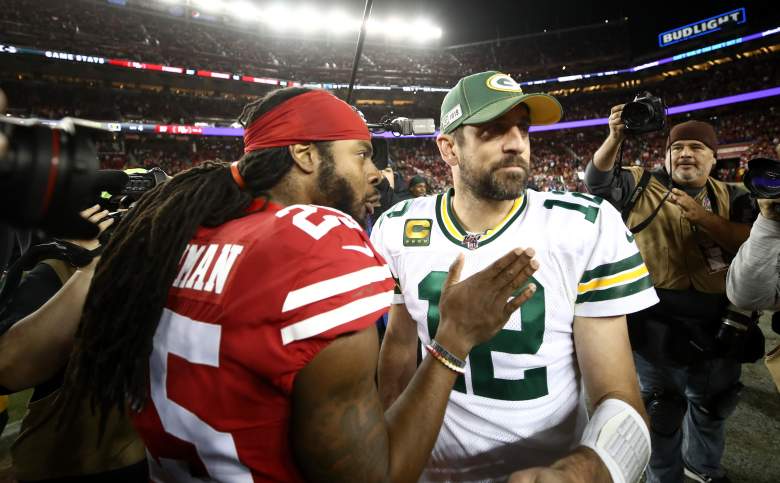 GettyAaron Rodgers of the Green Bay Packers shakes hands with Richard Sherman of the San Francisco 49ers after their game at Levi’s Stadium on November 24, 2019. (Photo by Ezra Shaw/Getty Images)

The NFL’s reigning MVP knows how good Sherman has been throughout his career. Much has been made of Rodgers’ refusal to throw at whichever receiver Sherman was covering in the past when they played against each other, and there has been a clear mutual admiration between the two players.

Sherman referred to Rodgers as “the best quarterback in football” in 2018, and Rodgers has thrown a great deal of respect the veteran corner’s way in recent years, as well.

“When he’s on the field, you have to be smart throwing the ball his way,” Rodgers once said about Sherman, via USA Today. “That’s just the type of player he is. I mean, he’s a super-intelligent guy, he’s got incredible football instincts and he can still impact the game in a number of different ways.”

The Packers aren’t usually too active around free agency, but they have done quite well for themselves in recent years. We’ll see whether or not they give Sherman a look, as he would make an interesting pairing with the talented young Alexander.

READ NEXT: Packers Rework Another Veteran’s Deal for Cap Relief

Discover more from Heavy on Packers↓

Loading more stories
wpDiscuz
0
0
Would love your thoughts, please comment.x
()
x
| Reply
The 3x All-Pro has been suggested as a potential replacement for Kevin King.