After negotiations between Orlando Brown Jr. and the Kansas City Chiefs regarding a long-term deal fell through, the Chiefs had some strong thoughts about Brown, which were shared by NFL Media’s Jeffri Chadiha.

“There was frustration and there was disappointment,” Chadiha said while on NFL Network on July 19 of the Chiefs’ stance on Brown rejecting their offer. “They really like Orlando Brown Jr. and they love having him be a part of this team, but the money he was asking for was too high for them. They don’t want to not have stability at left tackle here, but they also don’t want to pay top-of-the-market money for a player that they don’t think is the best player at his position in the NFL.

“One front office person said, ‘This isn’t the same guy that we traded for.’ The feeling there is that when they got him from Baltimore is that he was going to be a team player and work with them on a team-friendly type of deal. That was not the case. Right now we’re looking at a situation where Orlando Brown probably won’t be there for training camp and maybe won’t be there for Week 1.”

“This isn’t the guy we traded for.”

This is in reference to Brown coming to KC as a team player that was willing to work out a team-friendly deal.

In wake of Chadiha’s report, Brown took to Twitter to react to the news.

The latest Chiefs news straight to your inbox! Join the Heavy on Chiefs newsletter here!

While Brown didn’t post a tweet in which he shared his own thoughts on Chadiha’s report, he did like a tweet from Charles Goldman of the Chiefs Wire, who explained how the reporting done from Chadiha doesn’t add up.

“Some of this report really doesn’t add up to me,” Goldman wrote. “Like everyone knew Orlando Brown Jr. wanted to play and be paid like a left tackle before the #Chiefs even traded for him. The idea that he’s a different guy because he wouldn’t take a team-friendly deal? Come on.” 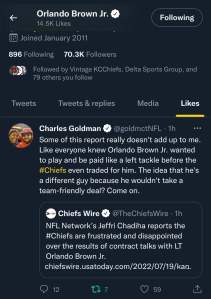 The deal Kansas City offered Brown was essentially a five-year contract that would have paid him $91 million, according to Mike Garafolo of NFL Media. Albert Breer of Sports Illustrated also shared that Kansas City’s offer to Brown included $38 million fully guaranteed and $52 million in injury guarantees.

The Chiefs were willing to guarantee his money through the 2023 season, per Garafolo. However, Brown and his agent, Michael Portner of Delta Sports Group, felt that the contract didn’t provide much stability for the left tackle in the backend of the deal, according to Pelissero.

“We got really close,” Portner told Pelissero. “We dealing with the Chiefs and we understand their position as well. I’m not gonna let these athletes sign a flashy contract without the substance or security there.”

Portner: “We got really close. We dealing with the Chiefs and we understand their position as well. I’m not gonna let these athletes sign a flashy contract without the substance or security there.”

On top of all this, Brown has also not signed his franchise tender, which means he can sit out training camp without being fined by the Chiefs. However, he would be eligible for a team fine if he decided to sit out regular season games.

Kansas City’s veterans are scheduled to report to training camp on July 26.