The NBA is on its way back and the Los Angeles Lakers will get their shot at a championship.

In fact, many sportsbooks have the Lakers listed as a solid favorite to take home their 17th championship in franchise history. Caesars Sportsbook has the Lakers listed at +200, ahead of the Milwaukee Bucks (+275) and Los Angeles Clippers (+350).

However, not everyone is convinced that the NBA returning with its new 22-team format on Florida will be good for the boys in the purple and gold. Jeff Zillgitt of USA TODAY put the Lakers in the losers column when analyzing the new format because they might have a tough tilt waiting for the No. 1 vs. No. 8 matchup.

“The Lakers will end up the top seed in the West, making them favorites to advance to the Finals,” Zillgitt wrote. “However, instead of preparing for a first-round series against a young Memphis squad, they could up facing [Zion] Williamson and the Pelicans or Damian Lillard, C.J. McCollum and the Portland Trail Blazers. The Lakers would still be the favorites, but the matchup might be more difficult with more drama.

In the same article, Lakers star LeBron James was given the nod as a winner of the new format, giving him a chance to add another title to his resume.

“At 35 years old and still playing at an MVP level but with Father Time approaching the neighborhood, James gets another chance at a championship,” Zillgitt wrote. “Not finishing the season would have been crushing for James and by extension, the Los Angeles Lakers.”

Lakers ‘Excited’ for Return to Court 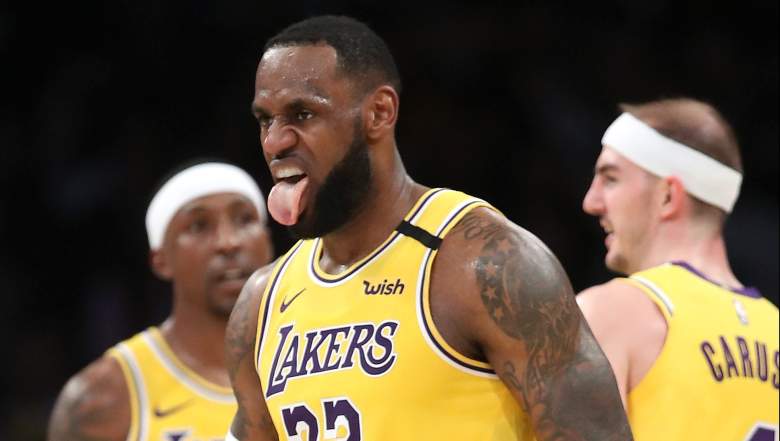 Before the NBA season was put on hold, the Los Angeles Lakers were rolling behind LeBron James and Anthony Davis, reeling off a 49-14 record. ESPN reporter Dave McMenamin described the feeling around the team with a return now imminent.

“I was just on the phone with a Lakers team source who was telling me ‘we’re all excited that the NBA figured out a conclusion to the season, because it means we have a title to play for,’” McMenamin said (h/t Silver Screen and Roll). “I also was in contact with a Lakers player who told me that ‘no one is going to have any problems with the stipulations that have been ratified with this vote because we get a chance to play.’ And a member of the Lakers coaching staff just texted me back ‘let’s roll, baby.’

“There is certainly a level of excitement to get this thing going, and of course there’s the idea that they’re going to have to wait five weeks or so before they play games, but they’re feeling pretty good right now.”

Talking with @KNegandhiESPN about the Lakers’ view of the NBA restart on @SportsCenter pic.twitter.com/Bl5eGzEhBw

The NBA’s planned return got its final stamp of approval when the National Basketball Players Association representatives voted in favor the format by unanimous decision.

In a statement, the NBPA said: “The Board of Player Representatives of the National Basketball Players Association (NBPA) has approved further negotiations with the NBA on a 22-team return to play scenario to restart the 2019-20 NBA season. Various details remain to be negotiated and the acceptance of the scenario would still require that all parties reach agreement on all issues relevant to resuming play.”

The NBPA player leadership was informed of a plan to keep 1,600 people in Orlando bubble at any given time, sources tell ESPN. Player families will be allowed to arrive after first-round of playoffs — likely three members at a time.

There’s a plan to keep around 1,600 people in the Orlando bubble at any given time, sources told ESPN, with a limited number of family members being able to join for the playoffs.

Loading more stories
The NBA is on its way back and the Los Angeles Lakers will get their shot at an NBA title — but it won't be easy.