The Los Angeles Lakers will be without the services of veteran guard Rajon Rondo for Game 4 against the Portland Trail Blazers on Monday.

Rondo has been officially listed as out for the matchup because he is still dealing with back spasms — an issue completely different than the fractured thumb that has kept him out since the restart began. Rondo was set to be active for Game 3, but was a late scratch.

Frank Vogel says Rajon Rondo is out tonight, as expected.

Rondo injured his thumb on July 12 and his initial diagnosis was 6-8 weeks. He made an earlier than expected return, but the back spasms were an unforeseen issue. However, Rondo’s presence alone is a big boost for the Lakers.

“I’m excited about it. I really am,” Lakers head coach Frank Vogel said when it was announced that Rondo would be re-entering the bubble. “He’s a big part of our team’s identity. Our intelligence, our DNA. He’s a big part of all of that. To have him back is going to enhance our whole energy and juice as a group.”

Rondo has averaged 20.5 minutes per game this season — the lowest of his career. However, he’s found a way to be a contributor with 7.1 points, five assists and three rebounds per game. He’s also a big veteran presence with championship experience, something that is not easily replicated.

The Lakers were in need of guard help with starter Avery Bradley staying home from the restart and Rondo getting injured before a bubble game was played. Luckily, Dion Waiters was waiting in the wings for his opportunity and has fit in nicely in purple and gold during his time in the bubble so far.

Despite Rondo being injured and outside of the bubble until recently, Waiters said that he has helped him as he gets integrated with the Lakers.

Lakers guard Alex Caruso, who has been a key member of the rotation with Rondo out, had a similar sentiment.

“I kinda texted him a few times (while he was away),” Caruso told reporters. “Getting his thoughts after a couple games, talking about how I played, or how we’re playing as a team.

“Obviously we’re excited for him to be back because he brings something to this team that I don’t think anybody else can do, just with the experience and the way he plays in the playoffs. Understanding coverages and understanding what we’re trying to do with our schemes and our game plan, and then applying it into the game. He’s one of the most vocal people I’ve ever played with. I’m just excited to have him back. He brings a different dimension to our team that I don’t think anybody else can.” 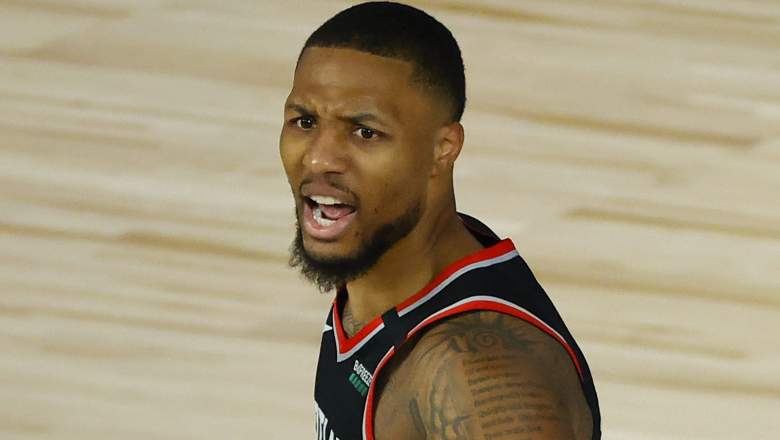 Blazers guard Damian Lillard is also dealing with an injury, having dislocated a finger in Game 2. He managed 34 points and seven assists in Game 3, but it was clear that the injury effected both his ball-handling and shooting.

“Obviously, I dislocated it, so it’s going to have some effect on ballhandling,” Lillard told reporters. “The biggest thing I felt was just going up to shoot, when I was gathering the ball, I was uncomfortable. Sometimes I would subconsciously try to ease up on it, so I would lose the ball a little bit.

“When I was making moves, in the middle of my dribble, I would ease up on it because I would feel the pain, and I would lose the ball a little bit. It kind of stopped me in my tracks. I did as much treatment as I could, and I tried to just ignore it. But once you decide to step out there, it is what it is.”

Lillard — the Bubble MVP — has been adamant that he’ll play through the injury. The Lakers lead the series 2-1 and are seven-point favorites for Game 4.

Read More
Basketball, NBA
The Los Angeles Lakers will be without the services of veteran guard Rajon Rondo for Game 4 against the Portland Trail Blazers