The talk of the NBA bubble in Orlando has been Damian Lillard, who has guided his Portland Trail Blazers to the No. 8 seed and the play-in series in the Western Conference against the Memphis Grizzlies.

Behind Lillard, the Blazers went 6-2 in the bubble and he averaged more than 40 minutes per game. Facing their season ending on Thursday night against Brooklyn, Lillard delivered 42 points in the 134-133 victory. The big night was one of his more modest performances, having put up 61, 51 and 45 previously in Orlando.

If Portland wins their play-in game, they’ll be facing LeBron James and the Los Angeles Lakers, who comfortably locked up the top seed in the west despite some less than stellar play inside the bubble. James reacted to Lillard’s incredible performance and mind-blowing shot-making skills on Instagram.

James reposted a meme with a bunch a crying laughing faces that said, “Imagine taking your girl with you to the court to watch you hoop and a dude does this to you. She will bring this up everything yall argue.” The image showed Lillard pulling up from the logo. 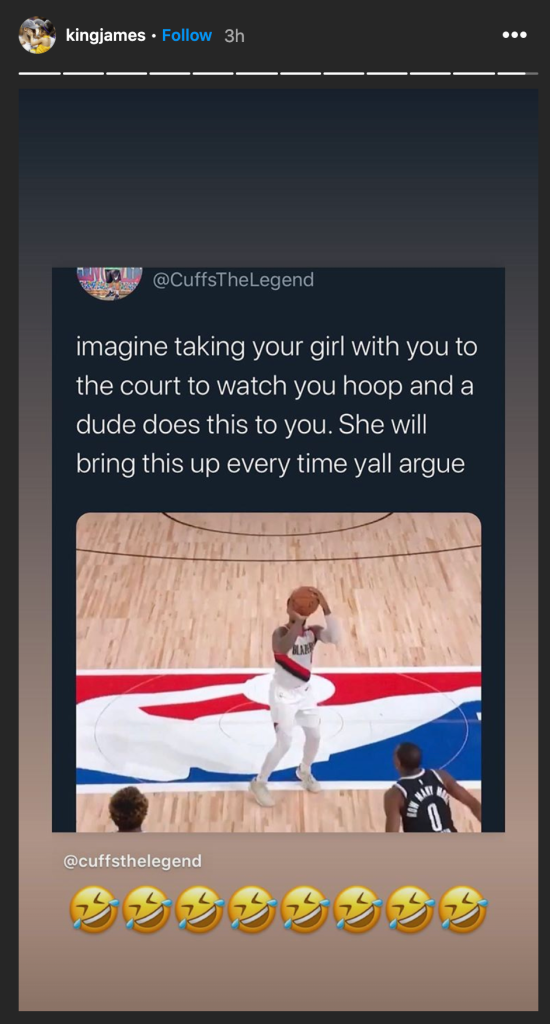 LeBron James Great This Season in His Own Right

Lillard has blown up in the bubble, adding to his already great season. But James wasn’t too bad himself in Year 17, landing among the MVP finalist alongside James Harden and Giannis Antetokounmpo.

James averaged 34.6 minutes, 25.3 points and 7.8 rebounds to go with a league-leading 10.2 assists. It was the first time his his storied career that he accomplished the feat. James will likely lose out to Antetokounmpo, who is the heavy favorite, but he’s not worried about it.

“Those awards are always great throughout this time of year, to acknowledge the individuals that’s had great years,” James told reporters last month. “Not only from a player’s perspective but for a coach’s perspective as well. So we’ll see what happens.

“I’m not disappointed because things happen. You control what you can control, and I can’t control that. As far as the MVP race, I think that I’ve shown what I’m capable of doing. Not only individually but from a team’s perspective, us being No. 1 in the West. There was a lot of conversation about, ‘LeBron can do those things in the East, but if he ever came to the West what could he do?’ I heard all that.”

Blazers Popular Pick to Upset Lakers in First Round

The Blazers have to beat the Grizzlies to set up a highly-anticipated matchup with the Lakers. But if Portland makes it, maybe are predicting that they could upset the purple and gold powerhouse.

“They have the best backcourt in the NBA because both (Stephen Curry and Klay Thompson) are injured. You’ve got Nurkic coming off the bench who can do it all,” Barkley said. “Gary Trent has been amazing,” TNT analyst and Hall of Famer Charles Barkley said. “You’ve got Zach Collins coming in. You’ve got (Hassan) Whiteside that’s blocking everything. They are big and strong. Listen, whoever plays that team, you’re going to have to bring it. Plain and simple.”

Charles Barkley says the Blazers will beat the Lakers in the first round and make the NBA Finals pic.twitter.com/4tv0lJO1BU

“I already said that if they get the No. 8 spot they are going to beat the Lakers. Not only that, they will go to the NBA Finals,” Barkley added.

Loading more stories
wpDiscuz
0
0
Would love your thoughts, please comment.x
()
x
| Reply
Los Angeles Lakers star LeBron James is among those in awe at what Portland guard Damian Lillard has done in the bubble.