Getty LeBron James of the Lakers.

LeBron James and the Los Angeles Lakers are kicking back, minding their own business and waiting to see which team they’ll face in the Western Conference Finals as the Denver Nuggets and Los Angeles Clippers do battle.

The Nuggets forced Game 7 with another thrilling comeback victory on Sunday, besting the Clippers 111-98, outscoring LA 64-35 over the final two quarters. It will come down to the decisive Game 7, which FS1 analyst Skip Bayless thinks will go in the Nuggets favor.

Bayless can always find a way to tie LeBron James into an argument and is already diminishing the championship the Lakers could win this season because of their opponents, calling the title route a “cakewalk.”

“CONGRATS, LEBRON: Looks like you just won your 4th championship,” Bayless wrote. “The Nuggets have now seized control of this series. Playing harder, making EVERY SHOT. So now, Bron, you get to beat the Nuggets and the Heat-Celts winner. CAKEWALK.”

CONGRATS, LEBRON: Looks like you just won your 4th championship. The Nuggets have now seized control of this series. Playing harder, making EVERY SHOT. So now, Bron, you get to beat the Nuggets and the Heat-Celts winner. CAKEWALK.

It’s been anything but a cakewalk for the Lakers this season. Not only did they have to deal with the COVID-19 pandemic — like all the other teams — but the death of Kobe Bryant in January shook the franchise to its core. The Lakers also had starting guard Avery Bradley opt out of the restart and have had to integrate some new pieces into the lineup while in the bubble.

In the playoffs, the Lakers have had to face off against a Damian Lillard-led Blazers squad that was dubbed one of the best No. 8 seeds ever, and the Houston Rockets, who they just dispatched in five games.

LeBron James: I’m a Winner and Always Have Been

James is seeking his fourth NBA title, which would add to his already bulky resume. James won a pair of titles in Miami with the Heat and another one with the Cavaliers. He’s won at every stop of his and understood what he was getting into when he decided to suit up in the purple and gold.

“I was taught the game the right way from my little league coaches. They taught me how to play the game, how to play for my teammates, it’s never about you and the true definition of ‘there’s no I in team.’ And I was able to win doing that and learning the game, all the way from when I was nine years old until I became a professional at 18. I’ve won at every level, so it’s always kind of worked for me.” 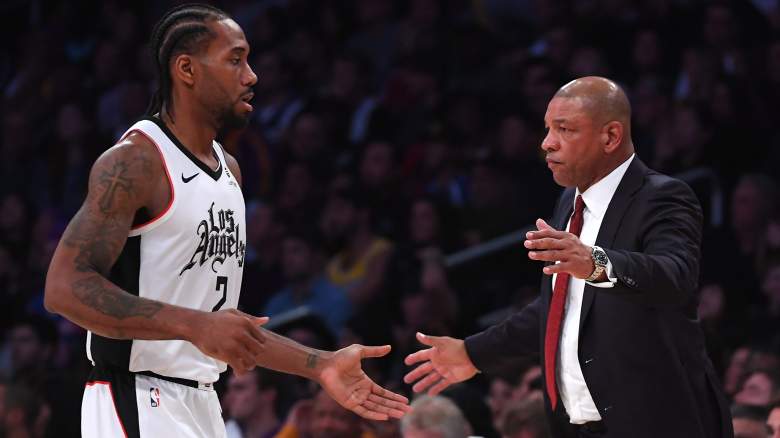 The Nuggets are a tough team to put away — just ask the Utah Jazz, who had Denver pinned in a 3-1 hole as well before losing in Game 7. Now the Clippers are learning the same lesson, having blown yet another significant halftime lead against the Nuggets.

“We clearly have the right formula, as to how we’re playing,” Clippers head coach Doc Rivers said. “But we keep losing it.”

Game 7 is scheduled for Tuesday. The Western Conference Finals will begin on Friday.

Read More
Basketball, NBA
LeBron James and the Los Angeles Lakers are kicking back, minding their own business and waiting to see which team they'll face in the Western Conference Finals.