The Denver Nuggets avoided a 3-0 hole in the Western Conference Finals on Tuesday night, holding off a mighty fourth-quarter charge from the Los Angeles Lakers for a 114-106 victory.

Nuggets guard Jamal Murray turned in one of his most complete stat lines of the postseason, dropping 28 points, 12 assists and 8 rebounds in the win. He also delivered some spicy postgame comments that will get the Lakers attention.

“We feel like we should be up 2-1 right now to be honest,” Murray told reporters after the game. “But we are just going to move on to Game 4.”

—Jamal Murray as the Nuggets trail the Lakers 2-1 pic.twitter.com/W60HzYyXR7

He might have a point. The Nuggets nearly took Game 2, but a buzzer-beating 3-pointer from Anthony Davis saved the day for the Lakers. Denver was on the verge of another collapse in Game 3, but a burst from Murray — including two late 3s — saved the day. 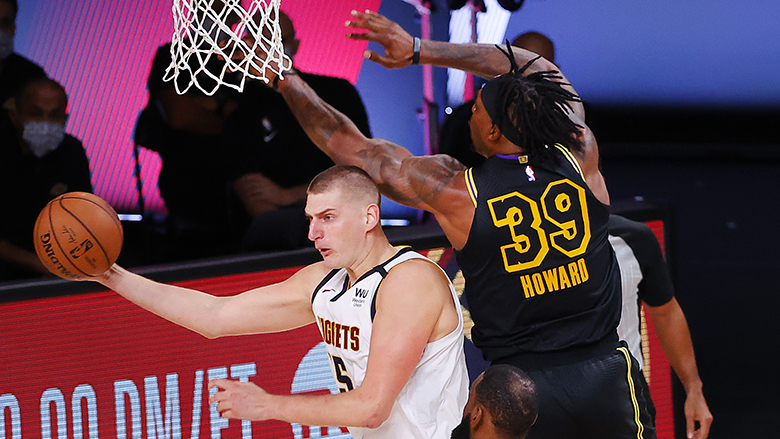 Murray stepped up late to help the Nuggets seal the victory late and his attacks at the rim in the early going helped his teammates get open looks. He had some help, too. Jerami Grant scored a playoff-high 26 in the win, while Monte Morris added 14 off the bench in just 20 minutes.

The Nuggets came back from 3-1 down their last two series, and are trying to make things easier this time around. But they’re still long shots to take out the top-seeded Lakers. Prior to Game 3, Vegas Insider had the Lakers at -10,000 to win the series — meaning you’d have to bet $10,000 to win $100. The Nuggets don’t mind the underdog role. It’s become familiar this postseason.

“Everybody always has us packing our backs and leaving, but we’re not ready to go,” Nuggets coach Michael Malone said, per the Denver Post. “For some reason, we love this bubble. I can’t explain it. This team loves the bubble.”

The Lakers aren’t as convinced the Nuggets can pull back into it.

“We’re still up 2-1. We have control of the series,” Lakers forward Anthony Davis said. “We just got to come out in Game 4 and play our style of basketball.”

Anthony Davis: "We're still up 2-1. We have control of the series. We just got to come out in Game 4 and play our style of basketball."

However, he added: “This team you have to put them away. You can’t expect them to just go away.”

LeBron James Not Upset Over Jamal Murray Elbow to Face

Murray was called for a Flagrant 1 when he hit LeBron James in the chin with his elbow while playing defense. While it might have looked bad — albeit a little embellished — James had no hard feelings in the postgame.

“I don’t think it was blatant, but I don’t know his mindset,” James said. “I don’t think he did it on purpose. I was cool with the ruling. I was okay with them saying a Flagrant 1. I ain’t here to fight.”

LeBron James on Jamal Murray's elbow: "I don't think it was blatant. I don't know his mindset, but I don't think he did it on purpose."

What the Lakers were not happy with was their effort through three quarters, forcing them to try to erase an 18-point deficit in the fourth.

“I thought Denver played with great energy throughout the game,” Lakers head coach Frank Vogel said. “We didn’t match it early. We matched it late. They are a great basketball team so credit them for the win.”

"I thought Denver played with great energy throughout the game. We didn't match it early, we matched it late." Frank Vogel on the #Lakers late run and the zone defense in the fourth. pic.twitter.com/yN2ZF6E0sQ

Game 4 is scheduled for Thursday from the bubble.

Loading more stories
Nuggets guard Jamal Murray believes the Nuggets should be up in their series against the Lakers.