Kyle Kuzma has been the target of frustration for some Los Angeles Lakers fans this season, despite the team being just two wins from a championship.

One group of fans were so upset that they created a petition this week demanding that Kuzma would not get a ring if the Lakers win the title. The petition had received 10,000 signatures as of Monday afternoon.

“Kyle Kuzma is a f—— and he shouldn’t get a ring if the LA Lakers win the 2020 NBA Finals,” the petition’s description read.

ALL the latest Lakers news straight to your inbox! Subscribe to the Heavy on Lakers newsletter here!

Kuzma has struggled at times this season with his role off the bench. He’s shined at times in the postseason, but was just 4-of-15 heading into Game 3 and hasn’t lived up to the “third option” billing he was given prior to the season. Kuzma chipped in 19 points on 6-of-13 shooting in Game 3 and responded to some of the hate he’s received on social media.

“I honestly don’t care,” Kuzma told reporters following Sunday’s game. “I dyed my hair blonde this year, I don’t give a f—. Twitter is for jokes. It really doesn’t affect me at all.”

Kyle Kuzma on social media hate: "I honestly don't care … I dyed my hair blonde this year, I don't give a fuck. Twitter is for jokes. It really doesn't affect me at all."

A petition went "viral" earlier today suggesting that he doesn't deserve a ring if the Lakers win a chip.

What might be rubbing a lot of Lakers fans the wrong way is the fact that the team kept Kuzma and shipped away the bulk of their young players in the trade for Anthony Davis. Branon Ingram was a key piece of that trade and became an All-Star this season. Ingram also garnered the Most Improved Player honor. Kuzma is grateful to be one of the few who remained on the Lakers roster.

“I could have been at home enjoying myself right now. That’s the biggest thing for us, to be here obviously. Like you said, big trades, having AD come here, and decide to put me in the mix to try to win a championship and be a part of a championship team, you know, I’m just very thankful for it,” Kuzma said.

Kuzma has averaged 11 points, 4.3 rebounds and is shooting 32.7 percent in the NBA Finals. During the regular season, Kuzma averaged 12.8 points in 25 minutes per game. 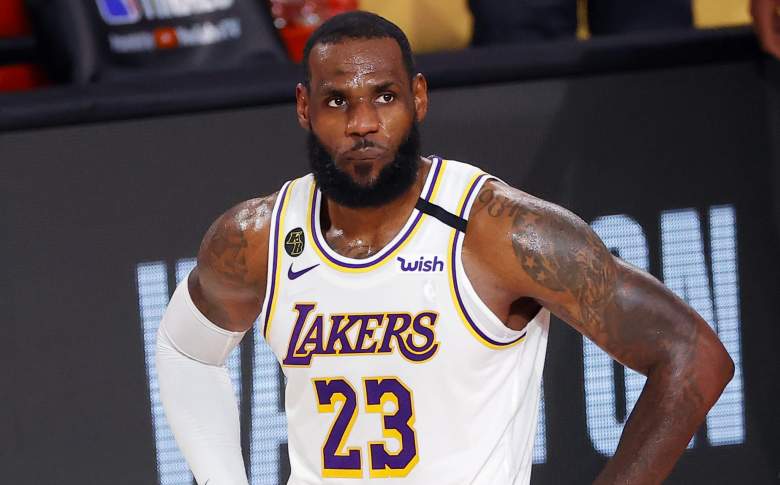 GettyFrustrated LeBron James, in Game 3 of the NBA FInals.

Before their Game 3 loss, the Lakers had been beat just three times in the postseason previously. They bounced back from each of those losses with victories, which they hope to do on Tuesday.

“We’re able to take a loss and understand why we lost. Understand things that we should have done better and things that we can apply to the next game to be better. We’re right back at that moment once again with the opportunity to be better than we were in the game before,” James told reporters on Monday. “Look forward to the opportunity tomorrow night.”

The Lakers are a 7.5-point favorite for Game 4 and are still -1500 to win the title. To be successful, the Lakers will have to cut down on turnovers. They had 20 in Game 3.

“Our turnovers really killed us,” James said. “We understand that we can’t turn the ball over versus this team. We also had some breakdowns defensively throughout the course of the game that we’re not accustomed to having. Those will be cleaned up in Game 4.”

Loading more stories
wpDiscuz
0
0
Would love your thoughts, please comment.x
()
x
| Reply
Kyle Kuzma has been the target of frustration for some Los Angeles Lakers fans this season, despite the team being just two wins from a championship.