Rajon Rondo’s stock is higher than it’s been in years after playing a big role in during the Los Angeles Lakers championship run, so when he hits free agency a bevy of teams will likely be in the running for his services, including the New York Knicks.

Rondo averaged 24.7 minutes in the playoffs after returning from a fractured thumb he suffered during a practice in the bubble. He put up 8.9 points, 6.6 assists and 4.3 rebounds during the postseason.

His leadership and ability to make plays with the second unit helped the Lakers turn the tide in a handful of games, which could be very attractive for a team like the Knicks. New York has an interest in Rondo, per Legion Hoops.

According to @LegionHoopsRoss, the Knicks are expected to pursue Rajon Rondo in free agency.

Rondo has been linked to the Knicks before and has history with head coach Tom Thibodeau — who signed with the team this offseason. Thibodeau was an assistant with the Celtics under Doc Rivers when Rondo was in his prime.

Frank Ntilikina and Dennis Smith Jr. — both just 22 years old — and Elfrid Payton are the current options for the Knicks at point guard. New York could also end up targeting a guard in the draft with the No. 8 pick.

Rondo has a player-option to consider this offseason, but considering he’s on a minimum deal, there’s almost no doubt that he’ll be opting out to seek more money. That could very well mean that he remains in purple and gold with the Lakers, but he’ll have some offers to weigh thanks to his playoff contributions.

Rajon Rondo Thanked Frank Vogel for Not Giving Up on Him 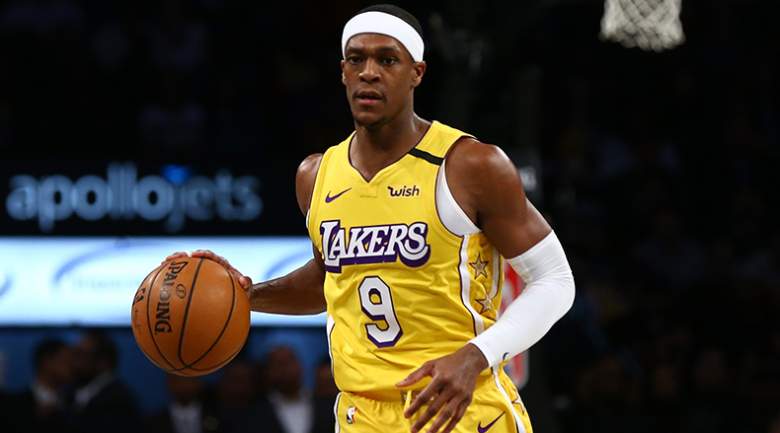 There was a point in the season where Laker fans were clamoring for Rondo to hit the pine. But Rondo turned out to be an essential cog for the Lakers in the bubble, which wouldn’t have been possible unless head coach Frank Vogel continued to have faith in him.

“He (Rondo) just took a moment to thank me for believing in him. To me, that’s one of the best moments as a coach, when you show confidence or belief in someone — and KCP and I had a similar conversation because he was being highly criticized early in the season,” Vogel said, per Silver Screen and Roll. “So when you show confidence and belief in someone and they reward you with their play, and it ends up in this situation leading to a championship, that’s just special and something I’ll never forget. Above all else, that’s what you do this job for. For those types of moments.”

The Lakers were Rondo’s sixth team after he had some turbulent times with the Mavericks, Bulls, Kings and Pelicans — all one-year stops. Now, the 34-year-old has one more chance to cash in.

“I’m definitely going to entertain it,” Rondo said when asked about free agency during a spot on ESPN’s First Take. “Obviously, always thinking about running it back with a great group of guys and coaching staff. I can’t thank those guys enough for giving me a shot the last couple of years. It’s been amazing playing for this organization.

“My agent and I will sit down and talk, but right now, I’m just kind of enjoying the moment, continuing to ride this high out. I don’t want to think about free agency right now; I’ve got a couple of months to do that as well. Right now, I’m going to enjoy the time with my family, friends, take a lot of great vacations and keep enjoying life.”

Loading more stories
wpDiscuz
0
0
Would love your thoughts, please comment.x
()
x
| Reply
When Rajon Rondo hits free agency a bevy of teams will likely be in the running for his services, including the New York Knicks.