The Los Angeles Lakers are not one week removed from winning the NBA title, but rumors about how the team’s roster will look next season are already starting to swirl.

While inking Anthony Davis to a long term deal will be at the top of the priority list this offseason, the Lakers also have a bevy of role players who have player options this offseason. Rajon Rondo, who came up huge in the postseason for the Lakers, is one of those players. Early signs indicate that the veteran guard will opt-out of the final year of his contract with the Lakers, per Chris Sheridan of BasketballNews.com.

Rajon Rondo is expected to opt out of the final year of his contract and become an UFA, per @sheridanhoops

Rondo averaged 24.7 minutes in the playoffs, rebounding from a fractured thumb he suffered during a practice in the bubble. He put up 8.9 points, 6.6 assists and 4.3 rebounds during the postseason. His leadership and ability to make plays with the second unit helped the Lakers turn the tide in a handful of games. 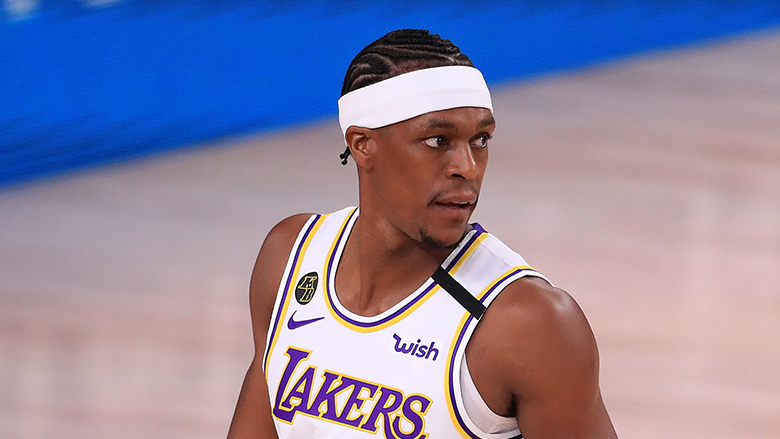 By turning down his player-option worth $2.96 million — the veteran’s minimum — Rondo will become an unrestricted free agent. It might be a smart move for the two-time NBA champion, who hasn’t seen his stock this high in a long time. He shot the ball well from deep (40 percent) in the playoffs and could be a valuable asset for a team looking for a veteran guard. And just because he’s opted out doesn’t mean that a return to the Lakers is out of the picture. He could just be looking for a little more cash.

“I’m definitely going to entertain it,” Rondo said when asked about free agency during a spot on ESPN’s First Take. “Obviously, always thinking about running it back with a great group of guys and coaching staff. I can’t thank those guys enough for giving me a shot the last couple of years. It’s been amazing playing for this organization.

“My agent and I will sit down and talk, but right now, I’m just kind of enjoying the moment, continuing to ride this high out. I don’t want to think about free agency right now; I’ve got a couple of months to do that as well. Right now, I’m going to enjoy the time with my family, friends, take a lot of great vacations and keep enjoying life.”

The Lakers have three other players who will weigh their player-options this offseason: Kentavious Caldwell-Pope ($8.5 million), Avery Bradley ($5.0 million), JaVale McGee ($4.2 million).

Rondo didn’t exactly have the reputation as a stellar lock room presence heading into his tenure with the Lakers, and many wrote off the 34-year-old guard. But Rondo was embraced by this Lakers team for his veteran savvy and basketball IQ.

“This dude is unreal,” Lakers third-year forward Kyle Kuzma wrote as the caption of a picture of him and Rondo celebrating. “The way he communicates and thinks the game is top 10 ever. And won a chip with the top two franchises.”

Rondo is a two-time champ — becoming the first player to win titles with Boston and LA — and a four-time All-Star, last getting the nod in 2013.

Loading more stories
wpDiscuz
0
0
Would love your thoughts, please comment.x
()
x
| Reply
Rajon Rondo will reportedly opt-out of the final year of his contract with the Los Angeles Lakers.