Getty Kyle Lowry celebrates during an ECF bout between the Miami Heat and the Boston Celtics.

When Miami Heat president Pat Riley pulled off the big trade bringing Kyle Lowry from the Great White North to South Beach, it’s safe to assume some tears were shed. After all, the deal meant the end of fan fave Goran Dragic’s multiyear run with the franchise.

Let’s be real, though — any sour feelings fans had about the move were left to the wayside in short order as Lowry’s acquisition felt like the thing that could could the Heat over the top in the East. To many, it was a move that hearkened back to dealing for Shaq, assembling the Heatles or bringing Jimmy Butler into the fold.

Regardless, Lowry’s first year with the Heat didn’t bear fruit in the end, as the club fell short in the Eastern Conference Finals and the six-time All-Star was in and out of the lineup due to injuries and some personal stuff off the court.

If you ask Heat legend Tim Hardaway, though, Lowry has it within himself to become more available and impactful in the year to come. He just has to change one big thing about his game that may be negatively impacting his durability.

Hardaway, who will finally be inducted into the Naismith Memorial Hall of Fame next weekend, sounded off on Lowry’s situation to the Sun Sentinel‘s Ira Winderman. During their conversation, the former baller shared his belief that Lowry’s tendency to flop has actually hurt him and his team.

“He needs to stop falling,” Hardaway said. “That’s why he’s getting hurt. And I’m going to say this, I love Kyle. Kyle Lowry, I love what he does out there on the court. I just wish he would stop flopping. I think keep that at a minimum.”

Lowry has long been lauded for his ability to draw fouls, particularly of the offensively variety. He even did it in the All-Star Game two years ago, blowing minds around the hoops blogosphere. However, Hardaway believes Lowry’s efforts to win extra possessions are actually costing him his health.

Riley famously called Lowry out for being overweight during his year-end presser, a situation that some have cited as the reason for the baller’s lack of availability at times last season. But Hardaway — who once endured similar criticism from Riley — thinks that the Godfather is off base.

“I want you to write this,” Hardaway told the Sun Sentinel. “Kyle Lowry is not fat. He’s not fat and overweight. He wears these football pads under him to make him look like he’s bigger. He’s way slimmer than what you think he is. I’ve been telling folks that for the longest. And everybody’s like, ‘No, he’s overweight.’ No, the guy is not overweight. It’s that he needs to stay healthy to stay in shape.” 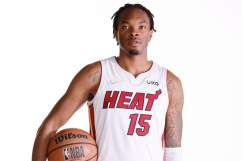