Getty Alexander Hollins was signed by the Browns off the Vikings' practice squad on Monday.

While Alexander Hollins not making the Vikings’ 53-man roster on Saturday wasn’t a shocker, it was a bit of a surprise as the Vikings kept seven wide receivers — compared to four last year — and Hollins was not one of them.

The decision came despite another impressive showing from the second-year wide receiver who went from an undrafted rookie to Vikings practice squad member and eventually played in five games last season. Zone Coverage’s Sam Ekstrom named him “Mr. Mankato” of this year’s training camp.

Hollins was re-signed to the team’s practice squad on Sunday along with 12 other players who were cut in the process of paring down to the final 53-player roster. The Vikings still have three available spots open pending kicker Chase McLaughlin is signed by the team, per Providence Journal’s Mark Daniels.

Special teams played a role in Hollins being cut as the Vikings kept in fifth-round rookie K.J. Osborn and undrafted rookie Dan Chisena, the biggest surprise of training camp, for their potential on special teams this season. The other wide receivers rostered are Adam Thielen, Bisi Johnson, Justin Jefferson, Tajaé Sharpe and Chad Beebe.

Standing 6-foot-1 and weighing 166 pounds, Hollins made a living with his speed throughout the first year of his career.

Playing in five games, he started in Week 17 against the Bears and made two catches for 46 yards against the Bears’ first-team defense. His speed carried him so far, but for him to make an impact in the regular season, he’ll have to develop an ability to make contested catches, which may come as he continues to put on more muscle. 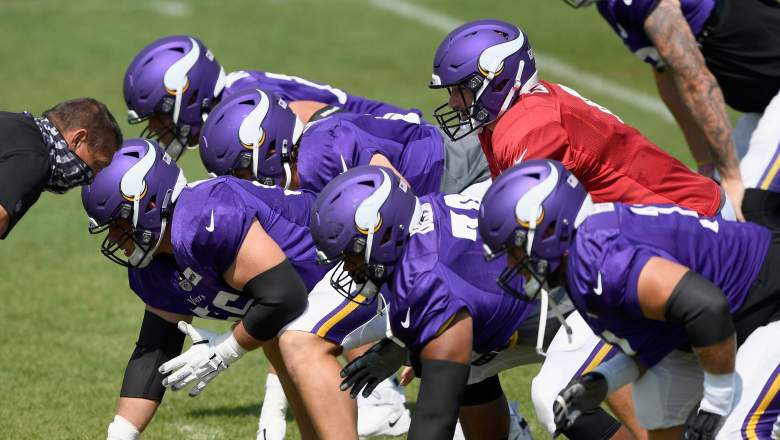 The Vikings practice squad is near complete.

Here are the practice squad adds beyond Hollins so far. All were reported by Chris Tomasson and the Vikings unless noted otherwise.

Quarterback has become the most vital position to have depth at with the chances of a positive COVID-19 test ruling out a player the day before a game. Browning and Stanley will both continue to develop with the Vikings and be the first call to move up in the event Kirk Cousins or Sean Mannion are ruled out.

Six-year veteran who was poised to make the 53-man roster but instead will be a source of development for the younger linemen on the Vikings practice squad roster.

Collins went from competing for the Vikings’ left guard job with Dakota Dozier to being cut. The fourth-year lineman has the versatility to fill in at several positions.

The seventh-round pick was a likely practice squad candidate who was drafted for his athleticism and a developmental piece of the Vikings franchise.

Sixth-round pick flashed in individual skill training and will develop as a lineman.

Depth need behind C.J. Ham. at fullback as the position becomes more sparse in the NFL, yet vital the Vikings scheme.

Undrafted rookie linebacker who could be activated if one of the Vikings five linebackers goes down. Versatile piece who made 32 starts at five different positions in college.

Slot cornerback who was on the practice squad last year.

Impressed as a 2019 undrafted rookie but behind three other tight ends on the Vikings roster.

An earlier cut this past week, Metellus landed on the practice squad despite no backup safeties rostered by the Vikings as the team may search free agency.

Played both cornerback and safety at training camp. Could be a roster fill-in at either position this season.

Not confirmed, but Mark Daniels of the Providence Journal has reported that McLaughlin is heading to the Vikings practice squad. He was 18 of 23 on field-goal attempts with the Colts, Chargers, and 49ers last year.

If McLaughlin is confirmed, the Vikings have 14 of their 16 practice squad spots filled. Undrafted rookie free agents Quartney Davis and Nevelle Clarke could be prime candidates as the Vikings have already spent $100,000 each in rookie free agency for them. David Moa, David Reese II and Hardy Nickerson Jr., who was just dropped on Sunday, are some other candidates for the final two spots.