Gone are the days of Adam Thielen being a timid, homegrown Minnesota boy trying to do good by making the Vikings‘ 53-man roster.

Thielen, 30, has become a Pro Bowl wide receiver and, with the mass exodus of veterans from the Vikings lineup this past offseason, is now becoming the vocal leader of his team.

Following two embarrassing losses to the Packers and Colts this season, Thielen, a Detroit Lakes native who grew up a Vikings fan, had a firm — and anything but Minnesota nice — message to his younger teammates.

The offense bounced back against the Titans, a moral victory in a 31-30, but his message goes even further that it’s not time to start licking their wounds.

Thielen and many of the more experienced players on the Vikings roster are now entering a motivational mode of keeping the younger players spirits up despite the 0-2 start.

Here’s how he responded on Monday when asked about the advice he’s given his teammates about not allowing the start to the season snowball in a press conference:

At the end of the day in the NFL, people don’t feel bad for you. You’ve got to figure it out, do it quickly and go get that swagger back. I think that will be the message to this team in our own position groups. ‘Hey, keep fighting. Keep working. Don’t change anything you’re doing. Just keep going at it, and it will click as long as you have that right mindset. And don’t sulk and get down on yourself or this team or this offense.’ … I’m just thankful we have great guys in this locker room, great coaches that are going to go fight for us and keep grinding for us to be successful.

You can watch the full press conference here.

Thielen Can Back Up the Talk 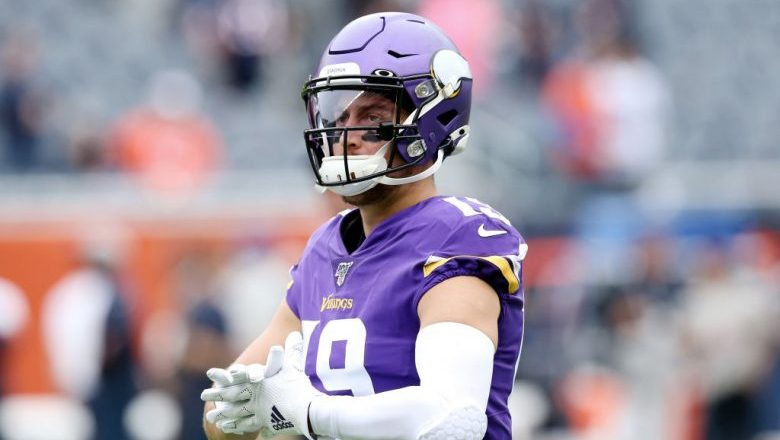 GettyThielen has had a rollercoaster of a football career and can speak from experience.

A former Division II prospect, Thielen was given a $500 scholarship entering college — barely enough to cover his book fees. He’s fought tooth and nail for every opportunity of his: first as an undrafted rookie who made the Vikings’ practice squad and then a special teams gunner before becoming getting a chance to crack the Vikings’ starting lineup.

A rags to riches Pro Bowler, Thielen’s taking of a leadership role on the team shows his commitment to the franchise he grew up watching. His challenge to his teammates further embodies his passion for the team as the Vikings are undergoing a transitional season after the release of seven starters.

Rookie wide receiver Justin Jefferson and Tajaé Sharpe will especially look to Thielen to aid their progressions in their first years with the team and quarterback Kirk Cousins. Things haven’t always been sweet between Cousins and Thielen who have shouted at each other on the sidelines before but the willingness to work through the rough spots and the success that followed last season could be looked to as the Vikings look to progress this season.

Loading more stories
wpDiscuz
0
0
Would love your thoughts, please comment.x
()
x
| Reply
He had a firm message to his younger teammates.