Getty Captain Munnerlyn called out the Vikings on Twitter.

Three cornerbacks landed on the latest Vikings injury report on Wednesday as the team’s cornerback corps have become depleted.

The #Vikings didn’t practice on Wednesday (9/30) and the practice report is an estimate. pic.twitter.com/sYOWvvPzNN

Third-year cornerback Mike Hughes had a possible flare-up of the neck injury that forced him to miss the majority of last season, while rookie third-rounder Cameron Dantzler is still recovering from a rib injury he suffered in Week 1 against the Packers. Both starters were out against the Titans and were joined by Kris Boyd, who is ailing with hamstring issues, on the injury report.

One fan on Twitter responded to the loaded injury report, reminding the Vikings that a proven and familiar veteran is available in free agency, Captain Munnerlyn.

Munnerlyn, 32, played three seasons with the Vikings from 2014-16 and last played for the Panthers in 2018. He was with Carolina for five years before he joined the Vikings and developed a reputation as a home-run hitter on defense, scoring five defensive touchdowns in his first five years with the Panthers.

Munnerlyn responded “what’s up Vikings,” with eyes emojis as the tweet caught his attention and surfaced his interest to return to Minnesota.

Few Week 17 games have meaning for both teams involved, but the Vikings’ Week 17 meeting with the Packers in 2015 decided which team would take the NFC North title.

While the game was lackluster offensively, the Vikings mustered a 20-13 win which included a 55-yard fumble-return TD by Munnerlyn that proved to be the game-winner, clinching the division crown.

Vikings vs Packers Week Video Flashback #10: 2015 and the Vikings beat Green Bay in Lambeau. To Good Captain (Munnerlyn) gets a TD. Remains a favorite of ours. @captain_41 #vikings pic.twitter.com/rUWErxoOQG

The win propelled the Vikings to into their first playoff appearance since 2012 and the first of coach Mike Zimmer’s tenure with the team. Munnerlyn went on to play one more season with the Vikings before he was released. 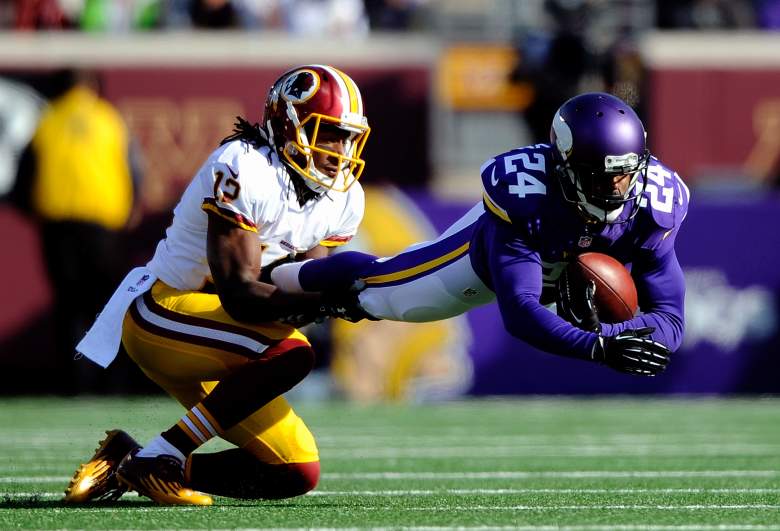 GettyMunnerlyn was recently arrested in what his agent called a “misunderstanding.”

On his way to Cancun, Mexico, this past summer, Munnerlyn was arrested on a plane in Miami on Aug. 8 for a fugitive warrant that claimed he was writing bad checks in Las Vegas, Fox Sports Radio’s Andy Slater reported. Munnerlyn’s warrant was cleared and he was not charged after he wired $200,000 to The Cosmopolitan Hotel in Las Vegas.

“An entourage took advantage of Captain and used his casino markers,” his attorney Ricky Patel said, per Slater. “Players need to be careful about who they hang with.”

Munnerlyn has made roughly $25 million in his NFL career as the arrest for bad checks seemed out of place for a player who’s had a clean record. With his financial status out of the question, his motives for seeking to be re-signed by the Vikings seem to be strictly his competitive spirit and less his need for another contract.

The Vikings cornerback room is lacking a veteran presence with an average age of 22 years old. Munnerlyn could provide leadership and replacing Hughes in the slot — his preferred position he didn’t play in the final year with the Panthers.

The former Vikings cornerback signaled his return in a tweet on Wednesday.