Getty Dalvin Cook and Terrell Davis show similarities on and off the field.

Vikings running back Dalvin Cook exited the first half of Sunday’s loss to the Seahawks with a groin injury that didn’t appear serious after Cook returned to the sidelines in the second half.

He returned for one play before the Vikings held the 25-year-old Pro Bowler out the rest of the game. Coach Mike Zimmer said in his postgame press conference that Cook will receive an MRI for a groin injury but has not indicated yet if Cook will play this Sunday against the Falcons.

Cook was in line for a heavy workload as he had 17 carries for 67 yards and a touchdown before he left the game. He leads the league in both rushing yards (489) and rushing touchdowns (7) despite his early exit from the Seahawks game. Cook is over 100 yards ahead of the league’s next leading rusher, Josh Jacobs, who has 377 rushing yards in five games this season.

Cook’s MRI results will likely be announced by Tuesday at the earliest.

Cook’s return to the sidelines and returning to the field for one play suggests the injury may not be severe. Clearly, there was some concern with him being taken out of the game again, but he didn’t appear to be in any more pain than he was from the initial injury.

Bears running back David Montgomery suffered a groin strain in training camp this past offseason and was expected to miss two to four weeks. Montgomery recovered in two weeks for the Bears season opener, however, he was limited.

The Vikings offense moved the ball well even in his absence, producing 123 of its 201 total rushing yards in the second half. 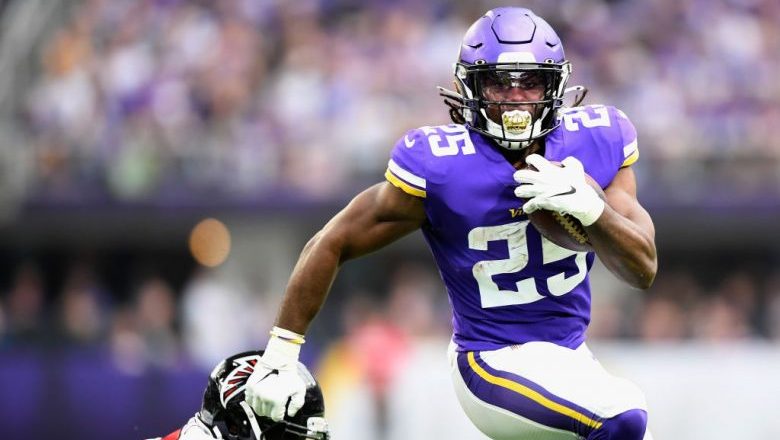 GettyAlexander Mattison’s first 100-yard rushing game was overshadowed by the Vikings’ shortcoming on fourth down.

Backup running back Alexander Mattison finished the game with 20 carries for 112 yards as there was little drop off in the Vikings ability to move the ball.

But Mattison’s final carry of the game where he was stopped short on the Seahawks 5-yard line on fourth down overshadowed the second-year running back’s first 100-plus yard rushing game.

Mattison took the handoff and followed fullback C.J. Ham up the middle while there was a wide gap outside. While fans have seen still photos of the play and lamented Mattison should have taken it outside, the video shows Ham hadn’t quite sealed the incoming linebacker while Brian O’Neill’s defender shed the block and had filled the game at the last second.

Seen about 900 screenshots of the Mattison run but no video so here's the video, please use the video pic.twitter.com/EYwMEWcmm1

The Seahawks eventually took the ball on their own 6-yard line and drove down the field to clinch the game dramatically following the play, which coach Mike Zimmer said he does not regret.

Loading more stories
The NFL's leading rusher will undergo an MRI on Monday for a reported groin injury.