Courtesy of Vikings Dru Samia has a reported wrist injury that could open a door for a replacement at right guard.

Vikings right guard Dru Samia was a surprise addition to Thursday’s injury report as the second-year lineman did not practice with a wrist injury. KSTP’s Darren Wolfson revealed that Samia received an MRI on Thursday, hours before the Vikings declared Samia out against the Falcons on Friday.

Wolfson reported that second-year, sixth-rounder Oli Udoh and second-round rookie Ezra Cleveland split first-team reps at practice on Thursday. Either Udoh or Cleveland could become the third-string replacement for initial starter Pat Elflein, who suffered a torn thumb ligament and underwent surgery after Week 1 against the Packers.

While any wishes of ill will on Samia were hyperbolic, fans and analysts had called for a change at the right guard position as Samia had become the league’s worst-graded lineman in the league during his four weeks as a starter.

The Vikings have supported Samia through what Kubiak called Samia’s “growing pains,” as Kubiak told local media he would continue to start Samia, however, his MRI results had the final say in his status against the Falcons.

Are Udoh & Cleveland the Right Fit?

While fans have sounded off that a giant pumpkin or a traffic cone would be a better right guard than Samia, there is concern that starting Udoh and Cleveland could be detrimental to their development as offensive tackles.

Elflein had a similar dilemma when he played right guard in college but was immediately thrust into a role as a starting center, then to left guard and finally back to his most familiar position this season.

He struggled in his first three seasons, including grading as the league’s worst offensive lineman in 2018, which can be a major confidence killer for a player entering the final year of their rookie contract, a cycle the Vikings could risk repeating on their prized second-round tackle of the future in Cleveland and Udoh, who showed promise in his one start last season at tackle. 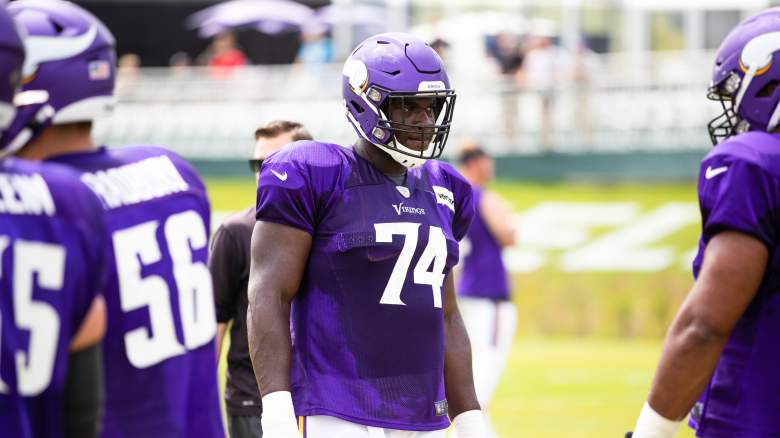 Courtesy of VikingsOli Udoh has the physical tools to succeed as an NFL lineman.

Udoh spent the majority of his first NFL season on the Vikings’ practice squad but saw substantial playing time in the regular-season finale last season. Lined up against Bears edge rusher Kahlil Mack, Udoh handled the All-Pro pass-rusher well, posting a 79.7 pass-blocking grade and a 63.7 run-blocking grade, both from Pro Football Focus.

Oli Udoh flashed both in pass protection and in run blocking yesterday. Here's a few snaps of his at right tackle going up against Khalil Mack: pic.twitter.com/yarJ5j1GL8

Udoh, who didn’t play offensive line until his senior year of high school, has the physical tools to succeed in the NFL (with the right technique). His 7-foot-1 wingspan grades in the 95th percentile of offensive tackles along with an impressive 5.05 40-time that ranks in the 89th percentile, per Mockdraftables.

His main struggles against the Bears was his grabbiness as Mack did take him for a ride a few times. He committed a holding penalty and unnecessary roughness call which are results of his inexperience against pro-caliber edge rushers.

Udoh’s introduction to the starting lineup could fast track him to familiarity with NFL-game speed and aid his development as a tackle.

Loading more stories
Samia may miss Week 6 vs. the Falcons and open a door for two possible replacements.