Minnesota Vikings wide receivers coach Keenan McCardell is confident in the group he has in his position room.

During pre-draft meetings, McCardell, who played 16 years in the league and won a Super Bowl with the Tampa Bay Buccaneers in 2002, made an “impassioned plea” for the Vikings to pass on drafting a wide receiver at a certain pick for the betterment of the rest of the team.

“We’re at a certain pick, and he gives this impassioned plea to pick a different position than his, and there are some great options that are there at his position, and there’s no words that needed to be said,” general manager Kwesi Adofo-Mensah said in a pre-draft press conference. “Everybody felt the moment. And when you talk about selflessness and team and all those things in that moment, he showed everybody what it was about.”

McCardell’s selflessness for the team was on display by him asking the Vikings to pass on a receiver in that meeting, but that didn’t stop McCardell from “pounding the table” on draft day for a late-round prospect.

The latest Vikings news straight to your inbox! Join the Heavy on Vikings newsletter here!

Every time @jalennailor touches the ball, he has a chance to take it to the house. pic.twitter.com/ReXtT752Vj

Nailor, a wide receiver out of Michigan State, was selected in the sixth round of the draft — a pick that CBS Sports deemed the best value of the draft for Minnesota.

A lanky receiver at 5-foot-11 and 186 pounds, Nailor leaned on his explosive speed to make plays. He averaged 19.2 yards per catch in his final two years of college.

“We’re always looking for guys who can finish and score,” Sholiton said of Nailor. “I know Keenan was in there pounding the table for him.”

“The best thing he does is getting the ball on the run getting him in space and he runs away from people,” Sholiton added. “Create separation with his speed and then pull away at the second level. Well-rounded athlete strong competitive blocker he does a lot of things well… Huge value where we got him.”

Nailor Bet on Himself

Another aspect of Nailor that drew McCardell to the Spartans receiver was his commitment to football.

Nailor moved from California to attend prep school powerhouse Bishop Gorman in Las Vegas — where he played football and won four state titles in track and field, earning himself the nickname, Speedy.

Nailor’s suddenness in his route running was unprecedented even at a perennial top-25 high school football program in the country.

“He runs that route like I’ve never seen,” former Bishop Gorman offensive coordinator Louie Rodriguez, who is now a head coach in Texas, told the Lansing State Journal. “Running a corner-post route in the middle of the field at full speed is unstoppable … how he transitions his feet and his body to do it full-speed. It’s unfair to the DB.”

And while draft analysts are skeptical of Nailor’s ability to handle the physicality at the next level, he’s shown the commitment to improve his game and his body throughout his athletic career. 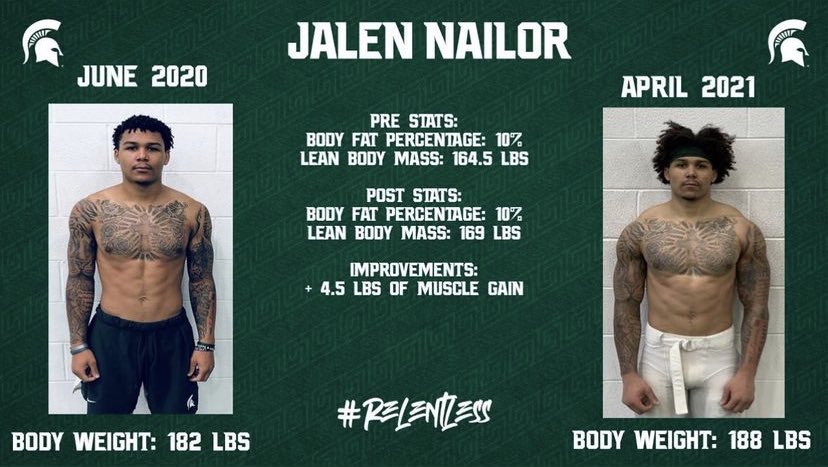 The question of whether the 23-year-old receiver can continue to develop his game and his body remains to be seen, but he’s drawn the eye of a coach who is as committed as Nailor.

“Another thing from talking with McCardell: (Nailor) is a guy that came from California, moved himself to Las Vegas… just to get himself a chance to get recruited,” Sholiton said. “Found himself playing in the Big 10 and gave himself a chance to be drafted… kinda saw his dream come true today. Happy to have him.”