Getty Golden Tate #15 of the New York Giants warms up prior to facing the Tampa Bay Buccaneers.

The Tate family is not happy with their current situation.

Despite numerous trade rumors circulating around wide receiver Golden Tate over the past few months, the 11-year veteran was not dealt at the trade deadline on Tuesday. In return, Tate’s patience appears to be wearing thin, as he remains an afterthought for a Giants offense that would appear to benefit from featuring a player of his talents.

Two days after Tate’s wife, Elise, went on a tirade over her husband’s lack of involvement in the Giants’ gameplan, the team disciplined the wideout, telling Tate to stay home on Wednesday.

“I spoke to Golden at length today and we’re dealing internally with a lot of things,” coach Joe Judge told members of the media. “He is not going to be at the walk-through today but he will be back in the building and practicing with us the remainder of the week. It will be business as usual.”

To make matters worse, on his day away from the facility, Tate “liked” a handful of tweets that likely won’t sit well with the higher-ups in New York. One, of a fan pleading for the Giants to cut the wide receiver. Another, a fan completely perplexed with Tate’s lack of usage in their offense. All of these can be seen in the screenshot below, originally grabbed by NFLUpdate.co. 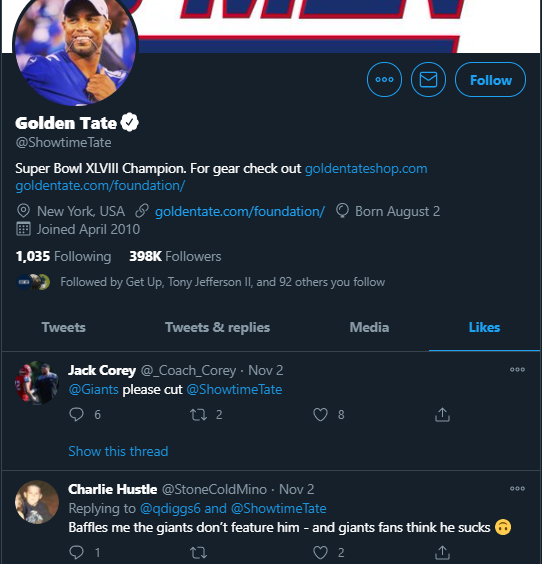 Tate was a near-hero in Monday’s night game against the Tampa Bay Buccaneers, hauling in a spectacular late touchdown pass, putting the Giants in position to tie the game with a two-point conversion, which they later failed to do. Yet, while his catch was undoubtedly jaw-dropping, it’s what he muttered to the camera after his catch that has made waves in New York the past few days.

Tate shouted, “throw me the ball” after scoring his second touchdown in as many weeks, as shown in the clip below, via ESPN’s Jordan Raanan. This, on a night that the team’s top-targeted player from a season ago saw just three passes come his way.

WR Golden Tate is a player the Giants are trying to move. The money (still owed almost $4.5M this year) could be prohibitive.

But Tate’s role with Giants has been shrinking (54% of snaps on Monday night). Only 5 targets past two weeks. Frustration growing?

“Throw me the ball!” pic.twitter.com/pZ85vmiyue

In the second year of a four-year, $37 million deal, it’s been reported that the Giants shopped Tate quite heavily at the deadline. However, as Raanan noted above, the fact that Tate was still owed nearly $4.5 million this season likely deterred any potential suitors.

With just 22 catches for 268 yards and two touchdowns on the season, and no guaranteed money left on his contract after this year, chances are we are witnessing the final stretch of Tate’s career in New York.