The New York Jets released the jersey numbers for the rookie draft class on May 6 and most fans agreed that one selection looked a little off.

That was No. 4 overall pick, Ahmad ‘Sauce’ Gardner, who chose the number 20 as a tribute to Los Angeles Rams CB Jalen Ramsey — but that didn’t last long. During his rookie minicamp press conference, the rising star told reporters that it was “kind of likely” he would change his number and that everyone would “have to stay tuned.”

Don’t buy your Ahmad Gardner (@iamSauceGardner) #Jets jersey just yet, Sauce said he picked No. 20 ‘for rookie minicamp until we get everything else sorted out’ + he said to @Connor_J_Hughes that it is ‘kind of likely’ that he will change it 🤣: 🎥 @nyjets #TakeFlight #NFL pic.twitter.com/HArusN7wGc

From there, a rollercoaster ride ensued for followers on social media.

They say one is the loneliest number, but NFL athletes must have missed the memo. After the draft, Gardner and running back Breece Hall had a brief interaction involving the No. 1 as their potential jersey selection of the future.

“I need that #1,” Hall responded to the Jets’ official Twitter account before Gardner joked: “No you don’t.” Only he wasn’t joking.

Veteran cornerback D.J. Reed Jr. laid claim to the No. 1 jersey when he signed with the franchise back in March and it appears Gardner has been trying to get it from him since the draft. On May 9, Reed finally confirmed that “it’s a done deal” after the rookie told fans to hold off on buying his jersey for now. 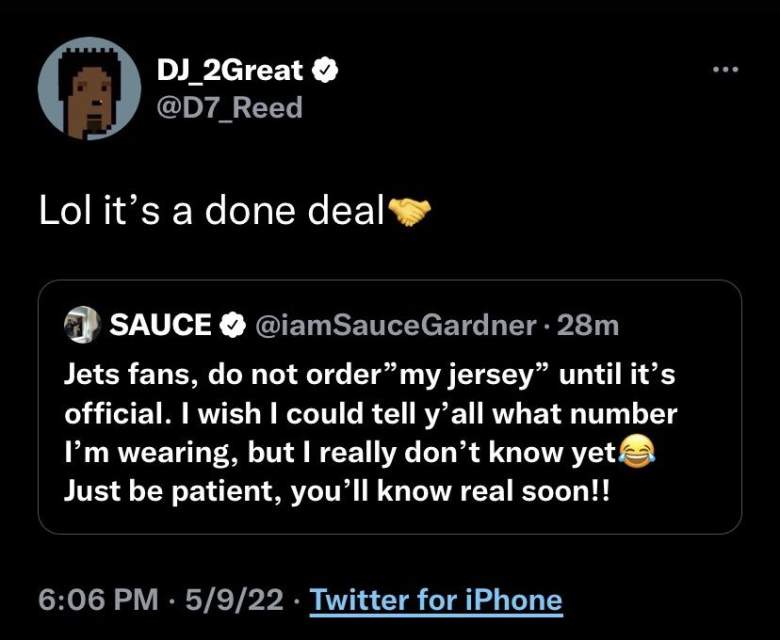 Reed then tweeted out a bunch of fours — the number Gardner was originally rumored to be switching to — and eventually, a photo of himself in the No. 4.

A long road of speculation that one fan noted switched from “#20, to #3 or #7, then #4,” and “back to [Gardner] wearing #1” appears to have finally ended. Jets Twitter rejoiced under the assumption that Gardner would be rocking that clean No. 1 jersey he wore at Cincinnati in year one with the franchise.

One question did remain, however, what did it cost?

It is official Ahmad 'Sauce' Gardner (@iamSauceGardner) is going to be rocking the No. 1 #Jets jersey after coming to a financial agreement w/ DJ Reed Jr (@D7_Reed) who will now wear No. 4: #TakeFlight #NFL pic.twitter.com/GVxM7EXhKG

It’s unclear how much Reed charged the first-year star for his number, but context clues lead one to believe that it was probably a pricey transaction. The ex-Seattle Seahawk actually purchased the No. 1 from Kai Nacua, a mid-season safety addition from 2021.

It’s only right that he got the same amount in return, unless Reed flipped the number for a profit. After all, he did control the leverage in this situation.

Fans speculated that the price tag may have been $250,000 until Gardner shot down those rumors himself, voicing: “Do I look like a goofy to you.”

You really got him to respond to you lol pic.twitter.com/zbCCJKvFg8

In the end, both players kept a lid on the exact amount for the time being — although Reed did provide some minor breadcrumbs. “Business is business & strictly financial,” the veteran corner tweeted with two money-bag emojis. How much dough two bags represents is anyone’s guess.