The New York Knicks are expected to make some upgrades in the offseason with the assumption being that they’re gearing up for a deeper run in the playoffs.

They definitely have a bunch of cap space available thanks to the plethora of 1-year deals coming off the books, but it might not be a foregone conclusion that they’ll swing for the fences.

Instead, the Knicks could stand pat for another season and pursue bigger names such as Bradley Beal or Zach LaVine when they become available.

This thinking might come as a result of Chris Paul presumably looking to stay in Phoenix and Kawhi Leonard potentially missing a large chunk of next season because of surgery.

Knicks Running it Back?

With the NBA Draft and free agency just around the corner, the Knicks have some big decisions to make.

They could hold off on big deals this summer in order to keep their cap space open for the 2022 free agent class.

The Knicks will have to spend some of their money this offseason because a lot of contracts are coming off the books.

Names like Derrick Rose, Taj Gibson and Nerlens Noel all played a big role on last season’s squad, so the team will have to make a decision regarding them. Even if all three of them return, there will still be a lot of spending money.

SNY’s Ian Begley says a source said that the Knicks could potential go down a similar path as last season and hold out for bigger free agents in the upcoming season.

“As recently as last month, a source said the Knicks have talked internally about the possibility of holding enough cap space this summer for 2022 and keeping enough money around to be able to go after a max player in that 2022 class, which should include Zach LaVine and Bradley Beal,” says Begley.


It’s not a bad strategy for a team looking to improve, especially if they aren’t able to land a name like Damian Lillard through at trade. That option does remain on the table, but the Knicks might be a little bit hesitant on giving up their future for a shot a going all-in on a title with a small window.

What Will the Team Do? 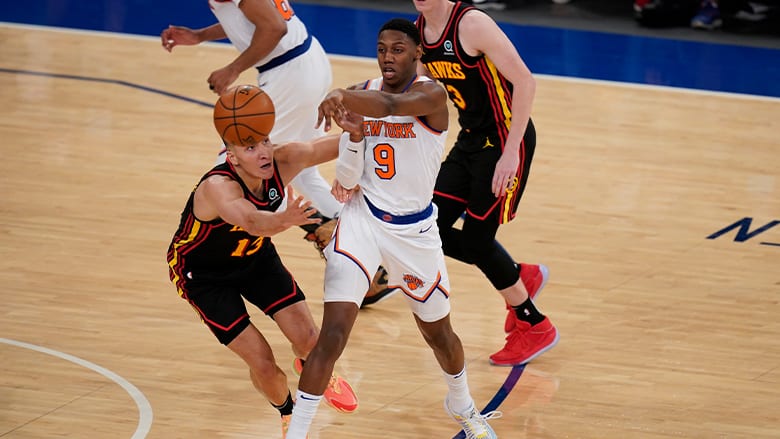 The Knicks are in a unique position this offseason because there doesn’t seem like there is a wrong answer for what they should do.

If they do stand pat and sign 1-year deals again, the young core will continue to develop and if they hit on the signings again, they could easily find themselves back in the playoffs.

On the other hand, landing a superstar in free agency or in a trade will cost them some of that young talent, but they should be on the cusp of being title contenders if somebody like Lillard comes over to New York.

For the time being, it’s tough to tell what the team will do, as they also have several draft picks they could either hold onto or package into a deal with another team.

The future of the Knicks looks bright no matter which way you slice it, and that’s something fans of the team haven’t been able to say for quite some time. Only time will tell what types of moves the team will make in the offseason.

READ NEXT: Analyst: Knicks Lottery Pick ‘Most Likely’ To Be Traded This Summer