The writing was on the wall, but now it looks like the rumors are turning into a reality and Portland Trail Blazers superstar Damian Lillard is on the way out.

For a while now, he’s been linked to the New York Knicks, and a variety of other teams, in one way or another. It’s well known that the Knicks are looking for an upgrade at the point guard position. What better way to upgrade than to add Lillard to the roster.

Not so fast, at least according to Blazers center Jusuf Nurkic. The center called out a report that specifically said Lillard was interested in going to the Knicks in the event of a trade.

A tweet from reporter Grant Afseth says Lillard has his sights on the Knicks as one of his possible trade destinations in the event of being dealt, but Nurkic doesn’t seem so certain about that.

In a response to that, Nurkic called Afseth a clown and called the report as a whole “cap,” which means false if you’re not up to date on the lingo.

Nurkic also calls out the initial report from True Hoop’s Henry Abbott saying Lillard is on the verge of requesting a trade.

“Y’all keep guessing at this point,” he said. “That’s my brother and you still have a better source?”

Y’all keep guessing at this point.

That’s my brother and you still have a better source?? #Comeon🤖 https://t.co/Xy8s9aLDqY

This is something players do quite often, and to be fair, it often is a lot of rumors with nothing substantial to back it up. Until Lillard comes out and asks for a trade himself, it’s tough for many fans to take it serious.

However, where there is smoke, there usually is fire and it’s very possible that Lillard could be on the way out in Portland. Whether the Knicks are able to scrounge up a trade package to get him on the team in another thing entirely, but they will certainly try to.

What Can the Knicks Offer? 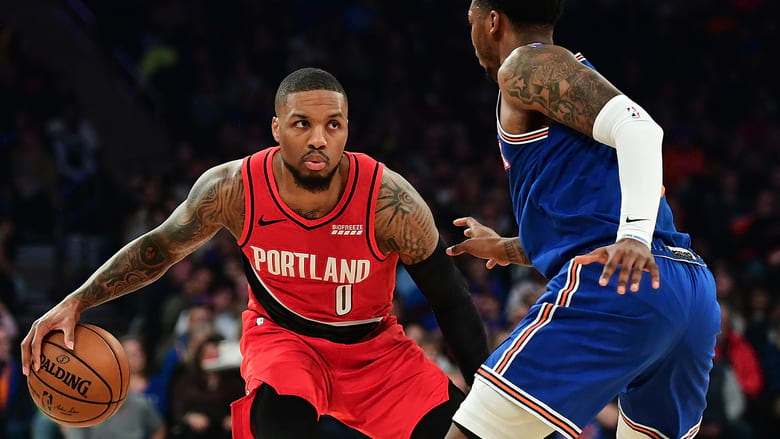 The tricky part about landing Lillard is coming up with the pieces to give the Blazers. It’s not like they will want to let go of their star player for nothing, so the Knicks will have to come up with a big offer.

Fortunately, they are loaded with young talent such as Obi Toppin, Kevin Knox, Immanuel Quickley and RJ Barrett, but it’s unclear with how much of that they are willing to part with. It’s also worth noting that the Knicks have four draft picks to potentially include in a trade this year.

This same squad secured the Knicks home court advantage in the first round of the NBA Playoffs, and it’s expected that they will only be getting better as the years go by and the core develops.

On the other hand, Lillard is on the other side of 30, but we’ve seen that players can remain elite well into their 30s, as evidenced by Chris Paul and LeBron James.

If the Knicks don’t win a championship after landing Lillard, it’s likely that fans and the team would look back on the whole situation being a failure, much like Nets fans look at the team giving up their immediate future to land Paul Pierce and Kevin Garnett.

Whatever the case is, it’ll certainly be an interesting offseason for the New York Knicks.