The New York Knicks made a lot of moves in the offseason that has them in prime position to compete once again in the Eastern Conference.

This isn’t the Eastern Conference of just a few years ago either, but instead we’re looking at a conference that is very deep, so the Knicks might not be able to replicate their success from last season, even if they find themselves with more talent now.

Some of that success will be relying on the health of players like Kemba Walker, Derrick Rose and Mitchell Robinson.

Each of those players have had their share of injuries over the years, but it might be troubling to see a youngster like Robinson dealing with them so early in the year.

He even missed the playoffs last season, so he didn’t get that vital postseason experience like the rest of the team did.

As we head into the new season, there’s a chance that the young center might not be ready for the start of it.

Says he can’t wait to get back.

According to The Athletic’s Fred Katz, Robinson said that he can’t wait to get back, but he’s not up to sprinting just yet.

As of right now, it appears that Robinson will at least be missing the preseason, and there’s even a chance he could miss the start of the season on October 20.

With his history of injuries, it makes sense for the Knicks to take it slow for his return. In the meantime, the team will need some other players to fill the void.

Who Will Step Up? 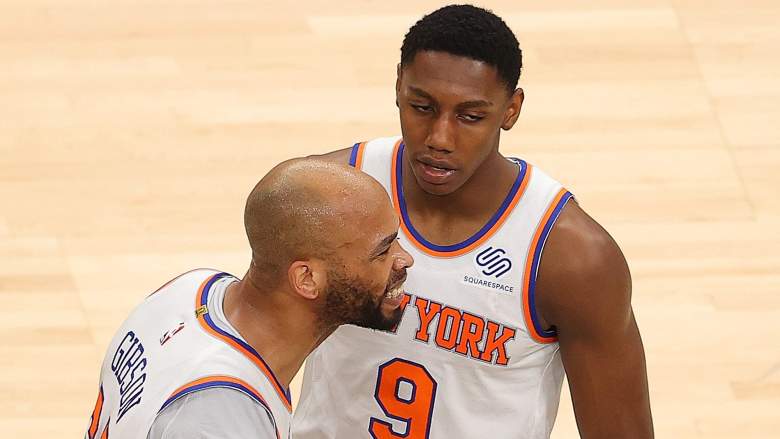 It looks like the contract for Nerlens Noel is paying off as if Mitch misses the start of the season, he’d be the one to step in and get the starting nod.

He recently revealed that the team asked him to look at adding a new weapon to his arsenal in the offseason, so this would be a perfect way to put it on display.

Backing him up would be Taj Gibson, an old favorite of Thibodeau. Closer to 40 than he is 30, Gibson wouldn’t be expected to play a ton of minutes, and he shouldn’t be, so the Knicks have to be hoping Robinson’s absence won’t be for too long.

He’s going to play a big role in the season, and he has already set some lofty goals for himself over the next several months. Obviously, he won’t be able to reach these goals without playing, so he’ll be working hard to get back into game shape.

With this being a contract year, health is key because it can be all the difference between a massive contract and a little one.