Jade Carey is an American gymnast who is competing at the 2020 Tokyo Olympics. She and her family are from Phoenix, Arizona. Carey is the daughter of Brian Carey and Danielle Mitchell-Greenberg and has three siblings.

The 21-year-old Carey appears to be single and has not talked about having a boyfriend or partner. Carey has two sisters, Alexsis Carey and Taeva Greenberg, and a brother, Xandon Greenberg, according to her biography on the Oregon State Beavers website.

Here’s what you need to know about Jade Carey and her family:

1. Jade Carey’s Parents, Who Were Both Gymnasts, Divorced Amicably When She Was Young

Jade Carey’s parents, Brian Carey and Danielle Greenberg, were both gymnasts when they were younger and owned a gym together when Jade was born, according to NBC Olympics. Jade Carey told NBC Sports, “I have been in gymnastics for as long as I can remember. My parents owned a gym when I was born so I was always in the gym playing. I love the feeling of learning new skills and flying through the air. My parents have been very influential. They were both gymnasts when they were kids and are both coaches now. My dad coaches me.”

Carey’s mother, Danielle, told the Arizona Republic, “My philosophy from the beginning was I just wanted her to love the sport on her own. Her dad and I never pushed. We let her guide the ship all the way through. We didn’t talk about gymnastics at home. She could really just develop the way she wanted to.” She and Brian Carey divorced when Jade was young, according to the newspaper. Her mother said the divorce was amicable.

Greenberg said on the Today show before the Olympics, “I believe she was about 4 years old; her dad and I were watching TV, and all of a sudden, oop, there goes a cartwheel. We looked at each other, and I said, ‘Did you teach her that?’ and he said, ‘No, did you?’ and I said, ‘No,’ and so I think we kind of knew at that point.”

2. Jade Carey’s Father, Brian Carey, Has Been Her Coach Throughout Her Career & She Says It ‘Means Everything’ to Her to Have Him by Her Side in Tokyo

Carey has been coached by her father, Brian Carey, throughout her career, and he has been by her side during the Olympics. Jade Carey told reporters in Tokyo, “Having my dad out there by my side means everything to me. I’m really glad we were able to share this together.”

Brian Carey told the Arizona Republic about the build-up to the Olympics, “It’s just been incredible. I’m looking forward to finishing this year strong with her. Then I guess I’ll go sit in the stands and watch her in college — that’ll be weird!”

Carey posted a photo with her father on her Instagram during the Olympics and wrote, “No one else i would want to share these moments with.” 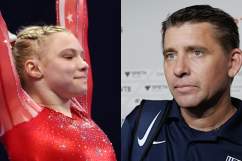 3. Jade Carey’s Mother, Danielle Greenberg, Has Been Cheering Her Daughter From Home Along With Jade Carey’s Siblings

Jade Carey’s mother and her siblings were watching from home as Jade competed in Tokyo. According to the Arizona Republic, they watched the individual all-around competition at the family watch party in Orlando, Florida. “It’s pretty electric,” she said of that experience. “We’re grateful they did that since we can’t be in Tokyo.”

Jade Carey wrote about her mother on Instagram in July 2020, “to the best momma ever, thank you for being my #1 supporter and teaching me to always believe in myself.”

Greenberg told the Arizona Republic, “I love it she can have her dad there (in Japan). He’s got her back in ever situation, it doesn’t matter what arises.”

She added, “Getting to compete in the all-around final at the Olympics, it doesn’t get much better than that as far as a once in a lifetime experience. She’s totally prepared, she’s totally proven herself as an all-arounder. It’s a wonderful opportunity to thrust her a little bit farther in the sport.”

4. Carey Plans to Follow in the Footsteps of Her Aunt & Uncle, Who Were Both Athletes at Oregon State University

Carey, who graduated from Glendale Mountain Ridge High School in Arizona, is studying at Oregon State University and has committed to compete as part of the Oregon State Beavers gymnastics team after the 2020 Tokyo Olympics, according to her bio on the Beavers website. She has delayed joining the team because of training for the Olympics. She began taking classes at Oregon State in 2020.

Eric Ory was a wide receiver at Oregon State in 1985 and 1986, according to Sports Reference. Carey’s uncle made 16 catches for 194 yards and caught a touchdown during the 1986 season for the Beavers.

Jennifer Ory, who goes by Jenna Stark Ory, was a sprinter. She holds the sixth-fastest 100-meter time in outdoor track at Oregon State, according to the Beavers record book. She also has the second-fastest 200-meter hurdles time in school history. She set those marks in 1987 and 1988. She also holds the record for fastest 55-meter dash in indoor track at Oregon State.

5. Jade Carey Celebrated Becoming an Aunt on Instagram in August 2020

Jade Carey celebrated becoming an aunt after her sister, Alexsis, gave birth to her niece, Olivia, in August 2020. Carey wrote on Instagram, “welcome to the world my little princess! you are sooo precious and i can’t wait to meet you🥰 i love you so much.”

Carey often posts photos with her niece on Instagram, including a photo from October 2020 with Olivia captioned, “besties for life🤍🤍.”

Carey’s 15-year-old sister, Taeva, has also competed as a gymnast, according to NBC Olympics. 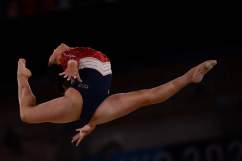 Loading more stories
wpDiscuz
0
0
Would love your thoughts, please comment.x
()
x
| Reply
Jade Carey is an American gymnast. She and her family are from Phoenix, Arizona. Carey is the daughter of Brian Carey and Danielle Mitchell-Greenberg and has three siblings.