Getty Michael Andrew with his father and coach, Peter Andrew.

Michael Andrew is an American swimmer competing in the 2020 Tokyo Olympics. Andrew comes from a close family and his parents are both involved in his career. His father, Peter Andrew, is his coach, while his family supports him from home in Encinitas, California. His mother, Tina Andrew, is his business manager. Michael Andrew turned professional when he was 14 and his family has been by his side throughout the journey.

The 22-year-old Andrew is competing in his first Olympics in Tokyo. He is competing in multiple individual events. He told NBC San Diego, “We’ve been through seasons where you get on a high and you start to think you’re all that and I realize I’m not, I’m just a man, that loves to do what I do, and I’m grateful for a family that keeps me grounded.”

Andrew added, “Dad’s my coach, mom’s my agent, my sister is my biggest supporter, we’re always surfing together hanging out and I wouldn’t be here if it wasn’t for the family unit that we are.”

Here’s what you need to know about Michael Andrew’s family:

1. Andrew’s Father, a Former Navy Diver & His Mother, Who Appeared on the British Gladiator TV Show, Were Both Born & Raised in South Africa

Andrew’s parents were both born and raised in South Africa, according to SwimSwam. The site writes, “Blessed with height, as well as hefty hands and feet, young Michael was born in the United States by two excellence ­driven parents.”

His father, Peter Andrew, was a swimmer and college and member of the South African Naval Defense Force as a Naval Operational Dive Team member, according to NBC Sports. His mother, Tina Andrew, was on the British Gladiator TV show, according to the Encinitas Advocate.

Along with coaching his son, Peter Andrew has been the head coach of the International Swimming League New York Breakers and ran the Aberdeen Aquaholics in South Dakota and the Indie Swimming and Race Pace Club in Lawrence, Kansas, and now in California.

According to The Washington Post, “The list of ways in which Andrew’s swim career has been unconventional could fill an Olympic-sized pool. His father is his coach, training Michael in the beginning in a two-lane pool in their backyard, and his mother has served as his business manager. He was home-schooled as a child, his family — tightknit and deeply religious — driving around the country in an RV to his meets.”

His mother, Tina, told Kansas.com in 2015, “It’s so radical, what we do. It’s very controversial and there’s been a lot of propaganda, a lot of questions.” His father told the newspaper, “He’s got to be nurtured. You don’t want him to just be swallowed up by the system.”

2. Andrew’s Sister, Michaela Andrew, Was Also a Swimmer & Is Now an Artist

Andrew also has the support of his sister, Michaela Andrew, who was also a swimmer, according to Swim Swam. Andrew’s sister is two years younger than him.

On Instagram, Andrew wrote in June 2021, “2008 to now, and my little sister has always been my biggest supporter! Happy birthday Michaela, I can’t believe you’re 20!!!”

Michaela Andrew is now an artist, according to her Instagram profile. She celebrated her brother’s Olympic achievement in June 2021, writing on Instagram, “A pause in art posts to say thanks for the best early birthday present. I’m so excited for the future and so thankful for the physical representation of Gods amazing redemption in our family. I’m so proud of my best friend @swimmermichael.”

She wrote on her website, “My name is Michaela but I go by Kale (like the vegetable) My goal as an artist is to use the gift of painting to make a difference in peoples lives, all while finding sustainable ways to create new art. Painting is my creative outlet and a way for me to worship God. I mostly paint what makes me happy which is the ocean (and lots of ocean animals).”

Michaela Andrew added, “This all started out as a blog and evolved into an online outlet for my art. I initially avoided selling my art as I feared losing the love for painting, but with increased demand and appreciation for my art, it compelled me to explore sharing my craft with the world. I found that as I started selling my work the love for it has only grown, and inspired me to work tirelessly to effect real change and make a difference one piece at a time.”

3. Andrew & His Family Share a Deep Christian Faith & He Has Credited His Accomplishments in Swimming to His Parents, Family & God

Andrew comes from a deeply religious family. He was homeschooled through a program affiliated with the Christian Liberty University, according to Kansas.com. Tina Andrew told the newspaper in 2015, “We don’t believe in evolution and stuff like that. When my kids were young, I didn’t want them to be taught about that until they had a mind that was sound and they could choose for themselves.”

Andrew went pro when he was 14 meaning he couldn’t compete collegiately, his father told Kansas.com, “We didn’t really want Michael to sit underneath the teachings and brain-washing (of a university).” His mother told ESPN, “Michael doesn’t need to be inundated with sex and drugs and ideas from liberal professor.” Andrew has given credit to his Christian faith, his parents, his family and God for his swimming success.

“Obviously, the Olympics are what everyone’s shooting for and what I’ll be shooting for,” Andrew told Liberty University in 2016. “That’s my goal, God willing. But swimming’s not everything. As a person and as an athlete and a Christian, I am not defined whatsoever by my results in the pool.”

Andrew added, “When I race, my goal is not to go out there and beat everybody around me. “It’s to use it as worship. I get into the water, and it’s my opportunity to see Jesus, to interact with Him one-on-one. When I race like that, and I actually feel His presence, it’s incredible.”

After qualifying for the Olympics, Andrew told reporters at his press conference, “As athletes we work really hard. We discipline our bodies for an outcome. This outcome is today, where we are now, and it’s amazing, but it’s perishable. And I think I can stand up on the blocks today and tomorrow and the rest of my life with a lot of freedom knowing that it doesn’t increase my worth and my value to my friends, my relationships, my family, and ultimately, with Jesus Christ.”

4. Andrew & His Family Moved to Encinitas, California, in 2018, After Living in Kansas & Minnesota

Andrew was born April 18, 1999, in Edina, Minnesota. His family has also lived in Lawrence, Kansas, and they relocated to Encinitas, California, near San Diego, in 2018, according to NBC San Diego.

Andrew told Swim Swam the family’s move was part of a reset.” It’s been really interesting in the recent season to see just our family dynamic. As a team we’ve always worked so well together, but we came to a, not a fork in the road, but an opportunity to kind of reassess where we were and what our purpose was as a team,” he told the swimming news site before the Olympics.

“Things were starting to become strained,” Andrew added. “Kind of realizing that swimming isn’t—as much as it’s our primary focus and what we’re doing as a team—it’s not what really matters. What really matters is us operating as a family unit and loving one another and being able to just keep the perspective healthy.”

He added, “And I think that’s been really cool, as through communication and working together for my whole career we’ve been able to figure out what’s the best path going forward. And that’s something I feel like, you wouldn’t ever be able to replicate, just with a coach, there’s such a bond between my dad and myself and my mom, and the fact that we’re all so involved in this journey, that there’s kind of — it’s take a village, but we need boundaries. Much like we have highs and lows in the performance, it’s being able to navigate those hectic times and the relationships that makes it all worthwhile.”

5. Andrew’s Family Has Defended Him After He Revealed He Did Not Plan to Get the COVID-19 Vaccine Before the Tokyo Olympics

Andrew has come under fire leading up to the Olympics after he told reporters during a press conference that he did not plan to be vaccinated against COVID-19 before going to Tokyo and had no plans to get the coronavirus vaccine at any time.

Andrew said on Inside With Brett Hawke, he had COVID in 2020. He added, “So my thought pattern is kind of like, if I’ve already got it, there’s not as much health risk for me. We’re kind of, I wouldn’t say conspiracy theory type family, but we’re definitely on the side where we look for what other methods are there. The same with the way we train. Just because everyone’s heading in one direction, why do we have to follow that direction?”

His mother defended his decision, telling The Washington Post, Andrew “doesn’t mind doing whatever it takes, whatever protocols they want, short of having to take the vaccine. He will do everything that is required, but he won’t take the vaccine.” 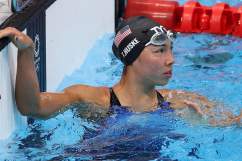 Loading more stories
wpDiscuz
0
0
Would love your thoughts, please comment.x
()
x
| Reply
Michael Andrew is an American swimmer competing in the 2020 Tokyo Olympics. His father, Peter Andrew, is his coach, while his family supports him from home in Encinitas, California.