Tampa Bay Buccaneers quarterback Tom Brady still simmers over a costly pick-six in his most recent game against the New Orleans Saints.

“P.J. Williams picked me off there in the last game,” Brady told the media on Thursday, December 16. “Still kind of pisses me off. It’s probably six weeks later, but it’s the reality of playing good teams and being a quarterback.” 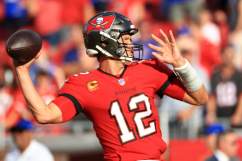 Though the Saints (6-7) slipped below .500 since amid injuries, Brady noted that the defense is healthy and that he’s done his homework. He expects another big challenge on Sunday at Raymond James Stadium.

“On defense, they’re not injured now,” Brady said. “They got a great defense. They got a great, powerful front. They played together a long time. It’s been one of the top defenses in the league. I think (defensive coordinator) Dennis Allen does a great job  preparing those guys. It’s just a very fundamentally sound defense. They make you earn it.”

Brady listed off five of the Saints defensive players, complimenting them on their skill sets.

“Demario Davis is one of the greatest linebackers  in the NFL, and it’s unbelievable how he plays the game, and in the secondary, Marshawn (Lattimore) and Marcus (Williams) and Malcolm (Jenkins) and (Bradley) Roby’s a phenomenal player. (Paulson) Adebo’s a great player. So, they got players all over the field,” Brady added.

Brady also noted that the Saints have been a tough opponent throughout this 22-year career. He has a 4-5 record in regular season games against the Saints.

That includes two beatdowns when the Saints throttled the Bucs 38-3 on Sunday Night Football last season and a 38-17 prime time loss in 2009 with the New England Patriots. Other than Brady’s first win over the Saints, 34-17 in 2001, every win has been by two scores or less.

“Always a tough team to  play as long as I can ever remember playing football,” Brady told the media on Thursday. “They just a great team, so at the end of the day, you gotta  play great to beat great teams.”

Brady’s Keys to Win vs. Saints

Brady made it clear that he and the Bucs will need to do much of the opposite on Sunday to avoid another debacle against the Saints.

Brady threw for 350 yards and four touchdowns versus two interceptions, but the run game did little to support the pass. The Bucs mustered 71 yards on 14 carries.

“You can’t have penalties and put yourself behind the sticks, so you got to convert on third down,” Brady added.

Last time, the Bucs went 8-13 on third downs and gave up 99 yards on 11 penalties. On a better note, the Bucs scored in the red zone every trip in that loss — a promising sign against the NFL’s 11th-ranked defense.

“They’re, I think, the top team in the red (zone) area, so they’re very difficult to score points against,” Brady said.