Getty Tom Brady heard surprising news on Friday about his rookie card and reacted with a hilarious Instagram story.

Even in the offseason, Tampa Bay Buccaneers quarterback Tom Brady finds a way to set a new record, and he reacted to the new record on Friday, saying that he has some work to do.

Brady’s autographed 2000 rookie card sold for a record $1.32 million per PWCC Marketplace, which provides a marketplace for people to buy and sell “investment-caliber trading cards” according to the company website. PWCC  reported that there are 100 Brady rookie cards of this version in the world and noted that it’s the “highest sale for a football card. Ever.”

Brady wrote, “Okay, I am definitely cleaning out the basement this morning” in an Instagram story, reacting to the price of his rookie card. He added a laughing emoji and a picture of the rookie card. 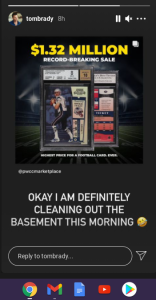 “I lived in Boston for 10 years and so am a huge fan of Brady,” Parker said per PWCC. “The last Super Bowl win was just a mind-blowing accomplishment. I’ve also had a love of collecting cards since I was a kid. Given Brady’s uncontested status at GOAT in football, this card is an important piece of sports history and of any collection and I’m incredibly excited to now own one of only 100 of Brady’s best rookie card(s).”

From Common Player to the GOAT

Brady didn’t start off his NFL career as a high-price rookie card-caliber draft pick, going at pick 199 with the New England Patriots in the sixth round of the 2000 NFL Draft out of Michigan.

He still uses his draft position as motivation, which he shared on social media recently.

Still gets me fired up… https://t.co/vjSuA7pxwh

Brady hardly played his rookie season in 2000 as a backup for the Patriots behind four-time Pro Bowler Drew Bledsoe. Everything changed in 2001 when Bledsoe got injured and Brady stepped up to lead the underdog Patriots to the franchise’s first Super Bowl win against the then-Los Angeles Rams, denying the “Greatest Show on Turf” a second title.

The Patriots never went back to Bledsoe, and Brady went on to lead the team to another eight Super Bowls in 18 seasons, winning five more of them. That included an 18-1 season in 2007 and the greatest statistical showing by a quarterback ever by Brady. He also amassed three MVPs along the way.

He left New England in March 2020 for a new challenge, signing with a Bucs franchise that hadn’t won a playoff game since 2003. Brady kept going strong at 43, throwing the second-most touchdown passes in a season for his career as the Bucs went 11-5 and won three-straight road playoff games to reach Super Bowl LV.

Despite playing in their home stadium, the Bucs came in as underdogs at a defending champion Kansas City Chiefs team that looked poised to start a dynasty. Brady and company shut the door in a 31-9 win as he captured his seventh Super Bowl ring in the latest chapter of his storied career.

His rise from draft day obscurity to seven Super Bowl wins already has Joe Montana, usually considered the GOAT before Brady, now calling Brady the GOAT. Brady’s rookie card value only shot up along the way.

READ NEXT: Tom Brady Wants New Receivers, but Not for the Bucs

Discover more from Heavy on Buccaneers↓

Loading more stories
Even in the offseason, Tampa Bay Buccaneers quarterback Tom Brady finds a way to set a new record, and he said on Friday that he now has some work to do.