Looks like Microsoft has finally decided to end the Scroogled adverts that attack Google’s privacy and security practices. According to Stefan Weitz, the Senior Director of online services at Microsoft, the TV advertising campaign attacks are “just about finished.” The Scroogle website however remains online.

According to Stefan Weitz, the idea behind the campaigns came from an opinion poll conducted by the Roper Center for Public Opinion Research. The poll showed that 70 percent of the respondents did not know about the practice of having their emails scanned for the purpose of displaying ads. Of course, when they found that out, they did not like it. Weitz said that Microsoft was only raising awareness to help people consider privacy when using Google’s services.

Microsoft was also able to direct more than 3.5 million people to the Scroogled.com website and had over 114,000 people sign a petition asking Google to stop scanning emails on Gmail. While Microsoft intends to end this “consumer education campaign”, the company says that conversation about privacy will continue. 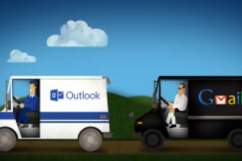